The Tricycle Community Presents this months featured film club, Kumare: the True Story of a False Prophet. I watched Kumare and loved it. I did a review of Kumare this past summer, which you can read here.

You can join the film club at Tricycle by becoming a sustaining member. Here is what Tricycle has to say about it: 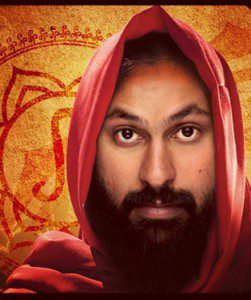 Disturbed by the fraudulent spiritual teachers cashing in on the yoga and meditation craze, New Jersey-born filmmaker Vikram Gandhi decides that it’s time to take action.

Growing his hair and beard, donning robes, carrying an Om symbol trident, and speaking in a phony Indian accent, Gandhi reinvents himself as the very thing he loathes: a fake guru named Kumaré.

Soon, he attracts a number of devoted disciples, and finds that despite himself he is a positive force in their lives. In the end, he must face his followers and reveal his true identity, potentially hurting those who have placed in him their complete trust and faith.

Is Kumaré a charlatan or a real teacher? The Tricycle community is divided. “An unspeakably cruel exercise,” one member wrote. “A real teacher pretending to be a fake teacher imitating a real teacher…it’s brilliant!” commented another.

Kumaré is playing at the Tricycle film club throughout March. Watch it here, and participate in a discussion with Kumaré himself, the film’s director and star Vikram Gandhi.