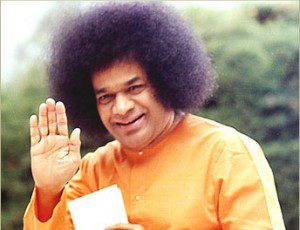 Satya Sai Baba, perhaps India’s most popular guru died the other day at 85 years of age. Read more from the Washington Post >>

I first became acquainted with the orange-clad and afro-sporting guru from hearing Ram Dass speak of him. Fantastical stories of materializing objects and such. In one of these stories, Sai Baba’s assistant confessed that Sai Baba did not actually materialize the objects out of thin air, he just moved them with his mind to the desired location! (I don’t think that claim was ever empirically validated).

Sai Baba was so popular that he would give darshon in a helicopter. Darshon is the tradition of bowing before the guru to get blessings.

When I traveled in India, I did not go to Sai Baba’s ashram in Bangalore. After being in an intimate setting with my guru at the time, the prospect of blessings from a helicopter left something to be desired. Still, I’m sure I missed a wild show.

As with many gurus, his life and work was marked by a mixture of philanthropy, controversy, and scandal, including sexual accusations of pedophilia later in his life (for more on sexual scandals in spiritual teachers, check out my blog entry on Scott Edelman’s Sex and the Spiritual Teacher).

I’m not taking sides here on the legacy of Sai Baba. To read more, you can google “Sai Baba” and “scandal.”

What I’d like to talk about is the distinction between the mystical Hindu traditions of bhakti (devotional) yoga and mindfulness, especially in regard to bliss.

In bhakti practices bliss is aimed for directly and often hit. Chanting with hundreds or even thousands of people can be ecstatic. Opening your heart to a loving guru facilitate bliss. However, this bliss is like a drug, and devotees keep going back for another hit of that bliss. I’ve seen this happen, participated it in myself in the 1980s.

In the Buddha’s approach, bliss is not aimed for directly. Instead, the target is what is here right now. Paradioxically, when we can give our full attention to what is happening now, no matter what that happening is, bliss may not be far behind. Bliss, is a by-product of present moment awareness and was not unknown to the Buddha. He spoke of the bliss body — sambhogakaya.

If we aim for the bliss body we might miss it. If we manipulate our experience through chanting, visualization, and so forth that bliss will be short-lived. That bliss is always present, we don’t create it. Rather, by directing awareness we reveal it as it is — there shining all of the time. The metaphor of the clouds obscuring the sun is often employed to make this distinction. The sun is always shining, even if we can’t see it in this particular moment.

What I’ve concluded that getting high on spiritual bliss feels great and it is not the same as wisdom — seeing things more clearly as they are and being able to distinguish between the skillful and the unskillful.

Sai Baba got countless people high on bliss. Now what for them that their guru is gone?

With mindfulness we become our own guru and are therefore never far from bliss.

Waking Up is a Revolutionary Act: A Manifesto for Mindful Living
archives most recent
More from Beliefnet and our partners
previous posts