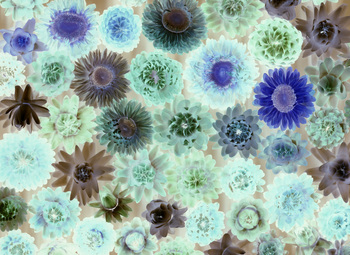 The Squid Eye metaphor comes from business consultant and coach Susan Scott in her book Fierce Leadership: A Bold Alternative to the Worst “Best” Practices of Business Today. It refers to the ability of squid hunters to detect their prey hiding on the bottom of the sea floor. Squid are good hiders so the hunters have to hone their eye to catch perceptual “tells” that reveal the location of the squid.

It’s the ability to see the Squid while he is blending into his natural environment. The ability to see him just being himself, even when he doesn’t want you to see him, even when he is hiding. Having Squid Eye means you see many things others cannot and do not see. It’s like having sight in the presence of the blind, you are a selective and efficient information gatherer. This is what Squid Eye really means. So for a fierce leader, with Squid Eye, they begin to spot the tells that let us know that these “best practices” aren’t working.

Squid Eye is a metaphor about perception and taps into the fascinating realm of selective attention. In any given moment we are inundated with information — data coming from our sensory organs for one and then, perhaps, other information in media and communication. We can’t process all of it. In fact, we can only be consciously aware of about one out of a million of those sensory bits in any given second. That’s not a typo, I meant one out of a “million.” No kidding.
This statistic comes from the neuroscientist Nor Torreanders. He calculates that our sensory organs take in about sixteen million bits of information per second and we can consciously process only eleven. Not eleven million but eleven: one, two, three, four, five, six, seven, eight, nine, ten, eleven. And that’s all folks!
So we select. And how we select depends a lot on context — both external and internal. Internal context comprises our beliefs, assumptions, and metaphors. Exposure to some idea or something in our environment will activate parts of our memory and steer attention towards seeing something linked to that, in other words, bias.
If we think about concentration as paying attention to whatever is most important in any given moment, the Squid Eye is a concentrated way of perceiving the world and one that mindfulness practice will facilitate. Mindfulness can help us to become aware of biasing factors and to increase our attentional capacity beyond eleven bits per second (the upper limit may be close to fifty bits or an almost five-fold increase).
Mindfulness, of course, helps us to see the world, others, and ourselves with increased clarity — more like it is rather than how we would like it to be. Mindfulness is also fierce in how it show us reality more clearly. Once we see this, we’ll have more choices on how to proceed. Going back into denial and bias is always an option, but one we’ve gotten tired of using. Instead, we can deal with what is right in front of us with authenticity, courage, and ferocity.

Stress Reduction Sunday :: Surviving the Holidays with Poise: Mindfulness Put to the Test
archives most recent
More from Beliefnet and our partners
previous posts