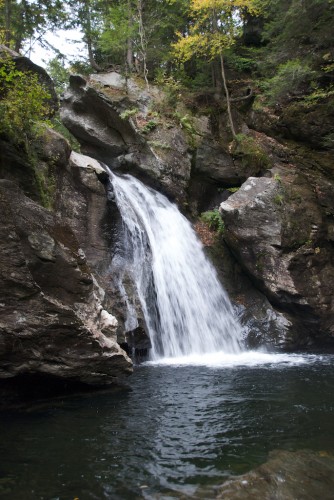 Let me tell you a thing or two about
the place where I live in Northern Vermont. Vermont has a population of
approximately 600,000 people and 300,000 cows. It is one of the least populated
states. Our shining metropolis, Burlington, has 40,000 people. Burlington sits
on the shores of vast Lake Champlain overlooking the Adirondack Mountains to
the West. To the East, lie the Green mountains worn smooth and covered with
trees over millions of years. The highest peak in Vermont is Mt. Mansfield
sitting at 4393 feet. There is a “Toll Road” that serves as a ski
trail in the winter and an access road in the summer. It’s $25 a carload, but
in the evening you can hike, run, or bike up. One evening, a friend and I mountain-biked
up. It’s a relentless 4.5 mile climb and an arm-seizing, white-knuckle, and
thankfully brief, plunge down its gravelly hairpin length.

Afterwards we went to a
“secret” swimming hole at Bingham Falls in the Smuggler’s Notch
National Forest. I say “secret” because busloads of Japanese tourists
are known to show up on the occasional unsuspecting skinny dipper. It’s a
half-mile descent in. We arrived at dusk and followed the sound of the raging
water. The falls sit in a 50 foot high bowl of boulders. The water was an
inviting and invigorating 60 degrees. A healing swim after the rigorous climb
up the mountain. To read a story on Bingham Falls in Vermont Life Magazine, click here.

The sound of the water is meditative and it is easy to be
mindful in a place of stark, isolated nature. The twilight and the refreshing cold
made my body come alive. I reflected on how fortunate I am to live in this
place where such wonders are more or less in my backyard. Why is it that a
place like this pulls us into mindfulness more so than a crowded subway car or
a suburban strip mall? There is likely an archaic reason for this. We evolved
in the natural world and this evolution still resonates deep in our psyches
when we are exposed to it. Of course, there is nothing inherently more real
here at Bingham Falls than there is at a cigar store on Seventh Avenue in New
York City. Both are empty in the Buddhist sense; both a process and not a
static thing. But we respond differently.

It’s a good idea to spend time in nature. Professor Randolph
Nesse cautions “natural selection has not had time to revise our bodies for
coping with fatty diets, automobiles, drugs, artificial lights and central
heating.” Research suggests that exposure to nature is beneficial for our
well-being. Just having a window in a hospital room can result in quicker
discharge and prisoners use less medical services.

The biochemist Reanny reminds us how iron got in our blood
poetically pointing to the interconnectedness we have with nature.

It was smelted into being in the fiery
furnace that was the brilliant core of a giant star; it was flung across space
by the violence of a super-nova when that star exploded into an apocalypse that
had the brilliance of a million suns; it congealed into the rocks of just-born
planet; it was rubbed into soil by wind and water and the action of microbes;
it was taken up and made flesh by plant; and now lives in a red cell,
circulating the rivers your blood, helping you breathe and keep your
consciousness afire, here, now.

We are not just connected to nature. We are nature.