FOMO: The Cost of Being Permeated by Desire

I recently heard a new acronym: FOMO
(fear of missing out). This is a panic that runs through our culture. It
permeates, if we are not mindful, every bit of our psyche. FOMO account for one
large portion of the variance of our suffering. Another portion can be
attributed to a new acronym I just coined: FOGWINE (fear of getting what is not
expected). Together these comprise the vast majority of what the Buddha called
dukkha. Dukkha, often translated as suffering, is more aptly translated in on a

FOMO is the representation of what I call the “deprivation
mind” in my book, Wild Chickens and Petty

Tyrants: 108 Metaphors for Mindfulness.” Are we really missing out? And
what is it exactly that we are missing out on? This is a problem that besets us
when we look outside of ourselves for fulfillment. The desire that underlies
FOMO is endless, a bottomless pit that can have us chasing our tails in
pointless pursuit. FOMO keeps us on the wheel like a hamster never reaching
that place of satisfaction (at least the hamster is getting exercise). Like
everything that arises in our minds, FOMO can be examined as a mental object.
We can see it as a production of our brain and not a reflection of ultimate
truth. We can challenge it too. What would be so terrible if we did miss out on
something? Why is it so important to have EVERYTHING? There is an episode of
South Park that features Cartman pacing in front of a game store awaiting the
release of the new Wii. Unfortunately for him (and everyone around him) the Wii
won’t be released for another three weeks. Cartman grunts, “Come on … Come on …
How much longer …” He bemoans his fate, “Time is slowing down, It’s like
waiting for Christmas, times a 1000” Certainly we don’t want to resemble
Cartman in any way, shape, or form. So we can look at FOMO as it arises
throughout our day and try to touch it with mindful attention. We can breathe
into this fear and see what happens.
read next post 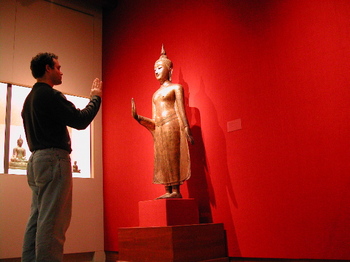 Welcome to Mindfulness Matters: Tools for Living Now with Dr. Arnie Kozak
archives most recent
More from Beliefnet and our partners
previous posts