Typewriters are Coming Back!!

Yes, that’s right. Typewriters are making a comeback among digital generation folks. The New York Times reports a wave of interest in even manual ones, in “Click, Clack, Ding! Sigh . . .” by Jessica Bruder. 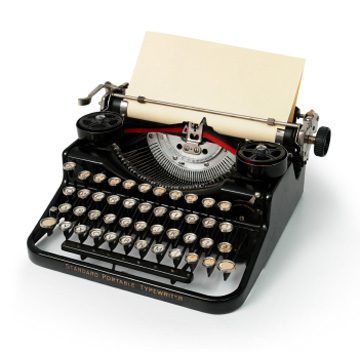 I’m not surprised about this, actually. It’s just the beginning of a major wave that’s coming, in which non-digital technologies will be rediscovered. Record player, here I come!

Why would people be interested in typewriters? Here’s what some have said, according to the Times:

“You type so much quicker than you can think on a computer,” Ms. Kowalski said. “On a typewriter, you have to think.”

“It’s kind of like saying, ‘In your face, Microsoft!’ ” said Richard Polt, 46, a typewriter collector in Cincinnati.

“If I’m on a computer, there’s no way I can concentrate on just writing, said Jon Roth, 23, a journalist who is writing a book on typewriters. “I’ll be checking my e-mail, my Twitter.” When he uses a typewriter, Mr. Roth said: “I can sit down and I know I’m writing. It sounds like I’m writing.”

This is just the beginning, I’m telling you.

read next post
Why Did Jesus Have to Die? The Perspective of Jesus of Nazareth, Part 4
archives most recent
More from Beliefnet and our partners
previous posts