Can We Find God in the City?

Go, inspect the city of Jerusalem.
Walk around and count the many towers.
Take note of the fortified walls,
and tour all the citadels,
that you may describe them
to future generations.
For that is what God is like.
He is our God forever and ever,
and he will guide us until we die.

In Psalm 48, Jerusalem is so closely associated with God that it reflects God’s own character. God’s greatness is seen in the height and magnificence of Jerusalem (48:2). God reveals himself as a defender in the towers of this city (48:3). The “fortified walls” and “citadels” of Jerusalem tell present and future generations that God is strong, protective, and permanent (48:12-13).

Does it make any sense in today’s world to think of a city as somehow reflecting the character of God? Many of us, I expect, think of cities as places of commerce, commotion, and crowds. We hear of great cities with declining populations and crumbling school systems. Surely, therefore, if we want to experience God, we must flee from the city to the country, where we can find rest and beauty.

As the Senior Director of Laity Lodge, a refreshing retreat center in a secluded canyon of the Texas Hill Country, you might guess that I’m a strong advocate of getting away on retreat. I do believe that, like Jesus, there are times when we need to steal away from the busyness of the city in order to be renewed in body, mind, and spirit. But Laity Lodge does not see the purpose of life as taking retreats. Rather, we understand that retreating for a season replenishes us so that we might go back into the world, which often means into literal cities, as God’s ambassadors.

I am encouraged to see more and more Christians embracing cities as places in which God is present and active. We are reclaiming our earliest roots, in which the cities of the Roman Empire were the focus of Christian mission. We are taking seriously for our own day the Lord’s command through the prophet Jeremiah: “And work for the peace and prosperity of the city where I sent you into exile. Pray to the LORD for it, for its welfare will determine your welfare” (Jer 29:7). Churches throughout the world, like Redeemer Presbyterian Church in New York City, are seeing their cities, not as hostile territory to be attacked or avoided, but rather as fertile ground for the seed of the kingdom of God. The compelling vision of Redeemer Pres reads: “To build a great city for all people through a gospel movement that brings personal conversion, community formation, social justice and cultural renewal to New York City and, through it, to the world.”

Whether you live in a giant metropolis or a small town, you have the opportunity to live out your faith in such a way that God is present in the place you live. Through acts of kindness and demonstrations of love, through speaking and living the truth, and through doing justice according to God’s Word, you can help your city or town be a place that reflects the very character of God.

QUESTIONS FOR FURTHER REFLECTION: How have you experienced God in the “city” of your ordinary life? How might you live so that God’s presence is revealed through you in your daily life?

PRAYER: Dear Lord, even as you once made your presence known in Jerusalem, we ask you to reveal yourself in the cities of our world. Show your justice and mercy, your grace and truth, to the multiple millions of people who live in cities.

Thank you, O God, for those who have embraced their city as a place of mission. Thank you for lawyers and teachers, for construction workers and city council members, for mothers and pastors, for police officers and bankers, and for all of your people who manifest your kingdom in the places where they work and live.

Thank you also for times of retreat, times that renew us so we can engage this world with deeper faith and broader love. 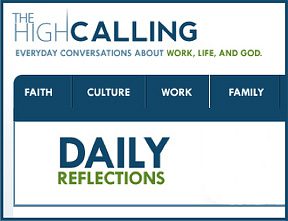 Would you like to receive a Daily Reflection like this one in your email inbox each morning?

This devotional comes from The High Calling: Everyday Conversations about Work, Life, and God (www.thehighcalling.org). You can read my Daily Reflections there, or sign up to have them sent to your email inbox each day. This website contains lots of encouragement for people who are trying to live out their faith in the workplace. The High Calling is associated with Laity Lodge, where I work.

Why Did Jesus Have to Die? The Perspective of the First Christians, Part 3
archives most recent
More from Beliefnet and our partners
previous posts