Why Did Jesus Have to Die? The Roman Perspective, Part 6

By Mark D. Roberts
If you would like to read this whole series up to this point in
logical/chronological order, visit this link:
Why Did Jesus Have to Die?
Roman, Jewish, and Christian Perspectives

In my last post I began to describe Pontius Pilate’s predicament on the Friday morning after Jesus had entered Jerusalem. The problematic prophet had been brought to Pilate by several Jewish leaders who demanded that he be crucified. But, for reasons I outlined previously, Pilate was reticent. Most of all, he didn’t want to incite the crowds who had gathered in Jerusalem for Passover. Silencing Jesus was a fine idea, but, from Pilate’s perspective, it had to be done in a why that protected him from the wrath of the Jewish people.

Pilate’s Decision to Have Jesus Crucified

Pilate tried passing the buck. He told the Jewish leaders to judge Jesus themselves, but they averred that they couldn’t execute him (John 18:31-32). He said, perhaps sarcastically, that they should go ahead and crucify him themselves (John 19:6-7), even though Pilate knew that crucifixion was legal only under Roman authority. At one point during the “trial” of Jesus, Pilate tried to pass the buck to Herod Antipas, who, as Tetrarch over Galilee, had the legal right to put Jesus to death. But Herod didn’t grab the bait. Instead, he used his meeting with Jesus as an occasion to mock him (Luke 23:6-12). (Photo: Nicolaes Maes, “Christ Before Pilate,” c. 1670.) 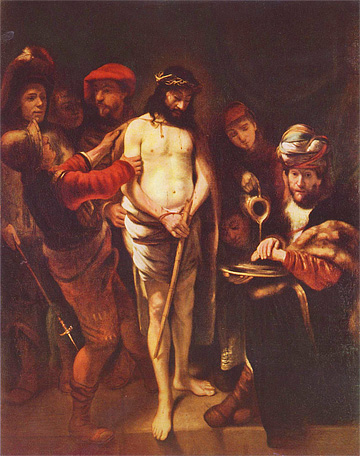 When the responsibility for Jesus’ fate fell back upon Pilate’s shoulders, he preferred to take the course of least resistance: have Jesus flogged, which would surely silence him for a while, and which, Pilate hoped, would keep the people from going on a rampage. But many of the Jewish leaders, combined with a mob that gathered outside of Pilate’s headquarters, pressed for Jesus’ crucifixion. Three factors seemed to have persuaded Pilate that executing Jesus was the best course of action. First, his reticence to kill Jesus appeared to put his loyalty to the emperor in doubt (John 19:12). Even the slightest appearance of imperial disloyalty could have terminal implications for Pilate. Second, the Jews who had gathered in his courtyard, although a tiny percentage of the current population of Jerusalem, were fervent enough in their desire for Jesus’ death that Pilate believed he could convincingly lay the blame on them. Third, his reticence to crucify Jesus was itself starting to cause a riot, which was the very thing Pilate was attempting to avoid by not executing Jesus (Matt 27:24). So his primary motivation for keeping Jesus alive – maintenance of order – was no longer valid. Jesus had to die.

In sentencing Jesus to death, Pilate revealed himself to be devious, if not spineless. He sent Jesus to the cross. The responsibility for this decision was his – at least from a legal-historical point of view. Yet when announcing Jesus’ fate, Pilate tried to avoid taking responsibility for his action. Symbolically washing his hands in front of the crowd, he said, “I am innocent of this man’s blood” (Matthew 27:24). Of course this wasn’t true. No matter now much others might have urged Pilate to take Jesus’ life, in the end, he and he alone had the authority to make that fateful decision.

The fact that Pilate had Jesus crucified strongly suggests that he saw Jesus as a threat to Roman order. Though not your ordinary brigand or revolutionary, Jesus proclaimed the kingdom of God (not Caesar) and accepted adulation as a messianic (kingly) figure. Moreover, even if his answers to Pilate were minimal, Jesus didn’t reject the charge that he claimed to be king of the Jews. So, even though Jesus wasn’t your run-of-the-mill Zealot, he was still the sort of person who was dangerous to Rome, and was therefore worthy of death, at least from the Roman point of view.

Pilate’s legal justification for crucifying Jesus appeared on the sign attached to Jesus’ cross: “The King of the Jews.” The wording and placement of this sign tells us much about Pilate’s ultimate motivation for killing Jesus. On the one hand, Jesus was being crucified because he dared to make a claim to kingship. On the other, by identifying the crucified Jesus as “King of the Jews,” Pilate was mocking Jesus, the Jewish people, and their kingdom aspirations – all in one ironic statement. In a manner consistent with what we know about Pilate from other sources, he was saying, “Here you go, you Jews. Here is your king – beaten to a pulp, powerless, a victim of superior Roman power.” Furthermore, by crucifying Jesus, Pilate also held him up as a persuasive deterrent: “Next time you think about having someone other than Caesar as your king, remember the crucifixion of Jesus, the King of the Jews.”

Why Did Jesus Have to Die? The Roman Perspective: Conclusion

From a Roman perspective, why did Jesus have to die?

•    Because he disturbed Roman order.

•    Because he spoke seditiously of a coming kingdom other than that of Caesar.
•    Because he allowed himself to be called “King of the Jews.”
•    Because he made a nuisance of himself at the wrong time (Passover), in the wrong
place (Jerusalem), in the presence of the wrong people (Pilate and the temple
leadership under his command).
•    Because his crucifixion would be a powerful deterrent that might keep other Jews from
following in his footsteps.

In my next post I’ll begin to look at the death of Jesus from one Jewish perspective.

Why Did Jesus Have to Die? The Roman Perspective, Part 5
archives most recent
More from Beliefnet and our partners
previous posts