Why Did Jesus Have to Die? The Roman Perspective, Part 4

As I explained in my last post, Pontius Pilate, the prefect of Judea during the time of Jesus, governed his territory from Caesarea, a city on the Mediterranean sea about 75 miles northwest of Jerusalem. Immediate authority over Jerusalem itself he had delegated to Caiaphas, whom Pilate had appointed high priest of the Jewish temple.

Pilate and the Danger of Passover

But, each year during his tenure in Judea, Pilate journeyed to Jerusalem in the spring. He wanted to be in this city during the Jewish celebration of Passover. It’s not that he had any fondness for the Jews and their rituals. Rather, Pilate needed to be in Jerusalem at this time to preserve order. He didn’t trust Caiaphas with such an important task at such a volatile time.

The Passover was, after all, a festival in which Jews remembered how God had delivered them from foreign domination. During the celebration of the Passover meal they not only thanked God for his deliverance in the past, but also prayed for him to do so again. Thus the Passover itself could easily inspire anti-Roman feelings, if not outright rebellion. 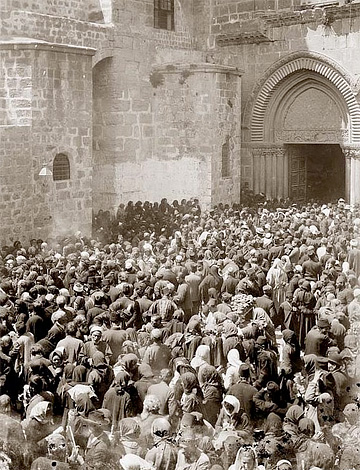 Moreover, the population of Jerusalem swelled greatly during the festival. Though it’s difficult to determine precisely the population of Jerusalem during the time of Roman rule, 35,000 wouldn’t be too far off base. During the Passover, however, this number swelled by a figure of ten or more. Josephus reports that 2,000,000 to 3,000,000 people gathered in the city for the festival (Jewish War, 2.14.3, 6.9.3). While most scholars believe that Josephus exaggerated, his estimates testify to the large number of pilgrims who came to Jerusalem for Passover. A more conservative estimate would be in the 300,000-400,000 range. Pilate knew that crowds of Jews jammed together in a small area was a formula for disaster. (Photo: A picture of a crowd in Jerusalem, gathered by the Church of the Holy Sepulchre in 1989.)

Given the themes of Passover and the massive temporary population of Jerusalem, it’s easy to see why Pilate felt it necessary to come to the city and why he would have done so with trepidation. Pilate was well aware of the fact that Jerusalem was a powder keg ready to blow during Passover. In fact, Josephus, talking about an earlier ruler who had tyrannized the Jews, mentions that “the nation of the Jews made an insurrection against him at a festival; for at those feasts seditions are generally begun” (Jewish War, 1.4.3, emphasis added).

Pilate didn’t come to Jerusalem unprepared. To help keep the peace, he brought with him a few thousand Roman soldiers from Syria. But, even then, the odds would not be in his favor if the Jews decided to stir up rebellion, since the soldiers were outnumbered by a factor of at least one hundred to one.

Given the tenuous peace of Jerusalem, Pilate must have been greatly distressed by early reports about Jesus’ actions in Jerusalem. This popular prophet from Nazareth had been welcomed into the city by a crowd of his followers who hailed him as a conquering king. Then, Jesus created a ruckus in the Jewish temple, even prohibiting sacrifices from being offered for several hours. So, while Pilate might have smirked to think of the distress this had given Caiaphas, nevertheless he’d be worried. What was Jesus’ agenda? What had he come to Jerusalem to do? Was he seditious? Was he fomenting rebellion against Rome? Pilate’s initial strategy was to watch and wait. Maybe, just maybe, he’d be lucky, and the Passover would conclude without incident. Then Jesus would go back to Galilee where he came from, and Pilate would return to Caesarea, where he could govern Judea a safe distance away from the time bomb of Jerusalem.

Pilate’s hopes for an uneventful Passover were dashed when, early on Friday morning, the problem posed by Jesus of Nazareth exploded in his face. In my next post, I’ll examine more closely Pilate’s interaction with Jesus and his accusers.

Why Did Jesus Have to Die? The Roman Perspective, Part 3
archives most recent
More from Beliefnet and our partners
previous posts