Why Did Jesus Have to Die? Introduction

As we approach the season of Lent, and then Holy Week and Easter, I propose to consider the question: “Why did Jesus have to die?” At the outset, I must say that this isn’t an easy question to answer for several reasons. Let me mention three. 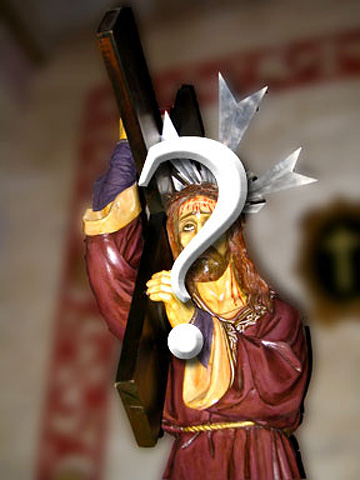 First, when it comes to the death of Jesus, we’re dealing with an historical event concerning which we have limited historical sources. We don’t have some of the sources that would make our task much easier, the diary of Pontius Pilate, for example, or notes from the proceedings of the Jewish council that examined Jesus prior to his crucifixion. Therefore, when I try to explain why Pilate or certain Jewish leaders believed that Jesus had to die, I’ll have to extrapolate from the evidence that is available to us. I do believe, however, that this evidence, both in the New Testament Gospels and in other ancient sources, is strong enough to allow us to formulate likely hypotheses concerning Roman and Jewish motivations for the crucifixion of Jesus.

Second, the question of why Jesus was put to death is a matter of considerable scholarly disagreement. For centuries it was common to put all the blame on “the Jews.” But the horror of the Holocaust combined with new historical insights has led scholars in almost completely the opposite direction. Many claim that “the Jews,” even Jewish leaders, had little or nothing to do with the death of Jesus. In my opinion, as you’ll see, the pendulum that had once swung way too far in the direction of “the Jews” has now swung too far back in the opposite “Romans only” direction. I’ll have more to say about this later.

I should add at this point that I am aware of the shameful history of anti-Semitism and the danger of anti-Semitism that is very much alive today. This does make it tricky to deal with the historical evidence in a straightforward way, because if one concludes that some Jews were somewhat responsible for the death of Jesus, this might fuel anti-Semitic attitudes and actions. So, I will say at the outset that nothing in the historical record justifies hatred of or mistreat of Jews, or any other people, for that matter.

Third, there is not one, simple, obvious answer to the question of why Jesus had to die. From a historical point of view, we have to deal with at least two perspectives, Roman and Jewish. In fact, I’ll show that there was more than one Jewish point of view on Jesus’ death. So it is really too simple to speak of “the Jewish perspective” on the necessity of Jesus’ death.

Furthermore, historical explanation doesn’t exhaust the realm of discourse when it comes to the reason for Jesus’ death. We also need to deal with the whole area of theology. We’ll want to know why, in light of his understanding of God, Jesus himself believed that he needed to die. Moreover, we must also examine early Christian thinking concerning why Jesus’ death was necessary for the salvation of the world. In the end, therefore, the answer to the simple question “Why did Jesus have to die?” will be anything but simple. It will have multiple layers and nuances.

Nevertheless, this is a task well worth the effort, both in the writing and in the reading. No matter what you think about Jesus, you will help yourself and your world if you’re able to discuss his death intelligently. This is especially true given the tendency of this conversation to become terribly anti-Semitic. In a world where hatred of Jews is on the increase, all thoughtful, compassionate human beings need to be informed about just who was responsible for the death of Jesus and why.

Finally, if, like me, you believe that the crucifixion of Jesus stands at the very center of history, then knowing why Jesus had to die is just about the most important bit of knowledge you can have.

In my next post I’ll lay out some basic parameters for the rest of this series: how I’m going to structure the series and some of the foundational facts upon which I’ll build the structure.

Unbroken: The Shocking Story of the Happiest Man I've Ever Known
archives most recent
More from Beliefnet and our partners
previous posts