Earlier in this series I spoke of discovering Advent. Of course I
didn’t discover it in the way an explorer discovers a place no one has
been before. Millions upon millions of Christians have observed Advent
for centuries upon centuries. (Check this short history of Advent.)
I’ve been a Johnny-come-lately. My discovery of Advent was more like
when I find some fantastic natural oasis that’s been around for a long
time, but, for some reason, I hadn’t ever visited.

What I want to write about today isn’t my discovery of Advent as an
opportunity for growing in my relationship with God, but rather my
accidental (providential?) discovery of one way to observe Advent that
has made a huge difference in my life.It came in a most unlikely place . . . standing in line at Costco.
Now you need to understand that I am terrible at waiting, especially in
long checkout lines. Some time ago, I was rushing to get a couple of
items at the market. I picked a short “Ten items or less” line, hoping
to buy my stuff and get going. Of course, the person in front of me
wanted to use a gift card, but the gift card couldn’t be read
electronically. The checker knew there was a way to enter the gift card
number manually, but he wasn’t sure how to do it. So he had to call his
manager. Five minutes later, I was still standing in that “short” line,
watching other lines moving swiftly. My teeth were grinding and my
stomach was churning. Mostly, I was mad at myself for picking the wrong
line.

My impatience with slow checkout lines makes me an especially lousy
Christmas shopper, because, almost by definition, Christmas shopping
requires waiting in line (unless, of course, you are able to do all of
your shopping online!) Whether you’re at a fine department store or
just grabbing some chips from the local mini-mart, chances are you’ll be
waiting in line during the month of December. And, if you’re like me,
inevitably you’ll end up in the slowest line in the store. This sort of
thing can just about ruin the Christmas season for me, because waiting
makes me grumpy.

Okay, enough with the confession, now to the discovery.

A
few years ago I was waiting in a long line at the Costco in Irvine,
California. In spite of my best efforts to find the shortest line, of
course I ended up in the slowest moving line of all. As I stood there, I
could feel my blood pressure rising. The more I waited, the more
frustrated I became. Words I never say (well, almost never) filled my
mind, and I’m not referring to “Happy Holidays.” “Why do I always get in
the slowest *^%#($ line?” I asked myself. “And why is this taking so *#^($&  long?” I grumbled under my breath. (Photo: Waiting in line at Costco)

Then, all of a sudden, it dawned on me. I had one of those moments of
grace in which God managed to slip a word into my consciousness. As I
stood in that slow-moving line at Costco, I was waiting. Waiting!
In a way, I was experiencing exactly what Advent is all about. Of
course I wasn’t waiting for God to save me or anything momentous like
that. I was simply waiting to get out of that store so I could go home.
But, nevertheless, I was waiting. I was forced to experience something
that’s at the very heart of Advent.

As I decided to let the experience of forced waiting be a moment of
Advent reflection rather than a cause for getting an ulcer, I found my
anger quickly drain away. Waiting in line at Costco became, not a trial
to be endured, but a moment of grace. And get this: I even found myself
thanking God for the chance to slow down a bit and wait. This was,
indeed, a miracle.

By the time I got to check out, my heart was peaceful, even joyous. I
felt as if I had discovered hidden treasure. But I didn’t want to keep
it hidden. The next Sunday I shared my discovery with my congregation
at Irvine Presbyterian Church. In the days that followed, many of my
flock told me how much their Advent had been improved by thinking of
waiting in line, not as a curse, but as a potential blessing.

Honestly, I can still forget my commitment to use waiting in line as a
time for Advent reflection. My gut instinct can take over. I can easily
start clenching my fists as I think of how much time I’m losing. But
then a gentle breeze from the Spirit will remind me of how waiting can
enrich my life, rather than rob me of joy.

Come
to think of it, the grace of waiting in line during Advent might also
be relevant to one of my other giant pet peeves: heavy traffic! Traffic
is often worse during the season of Advent as people are rushing to the
malls to shop for gifts. But I wonder if it’s possible to allow the
hassle of traffic to serve as a reminder of Advent waiting.

In the last few years, what I hate most about the days prior to
Christmas – waiting in line – has become a quasi-sacrament, a time to
experience God’s grace. If you’ve never tried this, it may sound to you
as if I’ve lost my mind. This sounds even sillier than wearing purple in
the weeks before Christmas rather than red and green. But let me
encourage you to try it. By experiencing waiting in line not as a
punishment, but as a opportunity to wait peacefully, you’ll find a bit
of grace, hidden and ready to be discovered, much like a little picture
behind one of those doors of an Advent calendar. 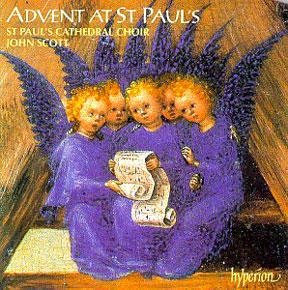 Growing Closer to God in Advent: Some Practical Suggestions
archives most recent
More from Beliefnet and our partners
previous posts