Could Aslan Symbolize Mohammed and the Buddha? A Response to Liam Neeson and the Christian Community

As I explained in yesterday’s post, Liam Neeson, the actor who provides the voice for Aslan in The Chronicles of Narnia films, has recently expressed his opinion that: “Aslan symbolizes a
Christ-like figure but he also symbolizes for me Mohammed, Buddha and
all the great spiritual leaders and prophets over the centuries” (Catholic News Agency). Today I want to offer a response to Liam Neeson, and also to the Christian community as we react to what he said.

First, however, I want to thank those of you who have added comments. I received several here and many more on Facebook. As expected, we have a wide range of opinion. And, for the most part, we have all communicated in a mutually respectful way. Thanks.

So, how do I respond to Neeson’s comment? I must admit that my first, unreflective, and quite visceral reaction is negative. I have loved the figure of Aslan for more than three decades, and have loved him both as a character in a story and as a figure of Christ. So, when Neeson says something about Aslan that I don’t agree with, my tendency is to feel upset. It touches a nerve.

I think my reaction is common among many lovers of Aslan, most of whom are Christians. Aslan becomes for us almost a sacred figure. He gets wrapped up in our devotion to Christ. Thus, our reaction when somebody says something uncomfortable about Aslan is much stronger than if someone were to say something similar about Gandalf or Dumbledore. If we’re aware of our strong emotions, then we will be better able to manage them as we seek to respond to comments like that of  Liam Neeson.

On of my commenters, Jennie, draws attention to a key part of Neeson’s quotation . . . for me. Remember, he said, “Aslan symbolizes a Christ-like figure but he also symbolizes for me Mohammed, Buddha and all that great spiritual leaders and prophets over the centuries.” Neeson did not suggest that the C.S. Lewis intended Aslan to represent a generic religious leader. Rather, the actor admitted his own personal reaction to the character.

Neeson’s is a common response to art. Even if an artist intends a certain meaning in his or her work, individuals respond differently to art, seeing different meanings that reflect their own subjective experiences. As long as an observer is willing to say, “This is what it means to me,” rather than, “This is what it means, period,” then we ought not to overreact. If, for example, I were to say that Aslan reminds me of my beloved grandfather, I doubt anyone would be distressed. If I were to say, however, that Aslan really represents my grandfather, or that Lewis intended such a connection, then you might well be put off.

I suppose that part of what is distressing about Neeson’s comment is that it seems so ignorant of Lewis’ intentions with respect to the character of Aslan.  As the National Catholic Reporter notes, “Lewis himself characterized Aslan as an invented imaginary answer to the
question ‘What might Christ become like if there really were a world
like Narnia, and He chose to be incarnate and die and rise again in that
world as He actually has done in ours?'” One might have expected Neeson to acknowledge this.

Honestly, though, I find Neeson’s comment to be so patently trite, so obviously PC, that I’m not upset by it. Rather, I’m almost bored. But I would love to ask him questions like: So what is it about Aslan that reminds you of Mohammed? What similarities do you see between Aslan and the Buddha? I would be surprised if Neeson’s answers would show any awareness of actual connections between the fictional lion and the other religious figures. It would also be interesting to ask Neeson if he sees connections between Aslan and Christ.

Many Christians have responded with to Neeson with predictable ire. In so doing, they have lost the chance to speak informatively to those who do not share their religious convictions. If we really want people to understand why Aslan is actually quite a bit like Christ, we would be well served to speak graciously and respectfully, listening well to those with whom we differ. I so often find myself wanting to say to my fellow Christians: Relax. Mellow out. We’ll talk when you’ve calmed down a bit.

Moreover, I don’t think we need to panic and rush to a defense of Aslan. If non-Christian folk are drawn to this character, even if their understanding of him differs from what Lewis intended, I think this can be great. Aslan is big and strong enough to defend himself. And he is compelling enough in his actual similarities to Christ that one who is drawn to Aslan might very well be drawn through him to the one upon which the lion is based. But if we Christians want people see Jesus through Aslan, then we ought to follow Jesus’ own advice and walk the second mile with Liam Neeson and others who say things about Aslan that we don’t agree with. 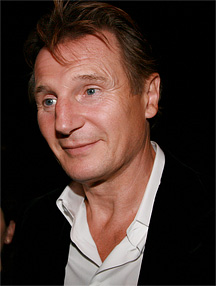 Could Aslan Symbolize Mohammed and the Buddha? Aslan's Voice Says "Yes"
archives most recent
More from Beliefnet and our partners
previous posts