What Do To If Someone Sins Against You: Lavish Forgiveness

So far our investigation of Matthew 18 has turned up the following guidance for what to do if someone sins against you:

After giving these directions, Jesus adds that the church has authority to recognize either the forgiveness or the outsider status of the offender.

The next passage in Matthew reminds us that, according to Jesus, the function of church discipline is redemptive, not punitive. It also reminds us of the extravagance of God’s grace given to us through Christ, and through us to others. (Photo: Rembrandt’s painting “The Return of the Prodigal Son” (c. 1669) is a classic picture of forgiveness and reconciliation.)

Peter came to Jesus and asked, “Lord, if another member of the church sins against me, how often should I forgive? As many as seven times?” (Matt 18:21). No doubt Peter thought he was being generous with this suggestion. But Jesus trumped his graciousness by responding, “Not seven times, but, I tell you seventy-seven times” (or it might even mean “seventy times seven” times, 18:22). The point isn’t the specific number. I seriously doubt that Jesus would want us actually to count up 77 instances of forgiveness and then stop. Rather, he picked a number that signified lavish forgiveness.

In case someone might wonder why we should be so extravagant with forgiveness, the next passage in Matthew 18 is a parable of Jesus in which a slave owed 10,000 talents to his master but was unable to pay. (The hyperbole is obvious here, in that 10,000 talents was worth something like 5 billion dollars in today’s economy.) Yet the master ended up forgiving this slave’s debt. Then the slave went to a second slave who owed the first slave 100 denarii (or 1/600,000th of what that slave had owed his master). But the evil slave did not forgive this debt. When the master learned of first slave’s lack of forgiveness, he sentenced this slave to be tortured until his debt was paid, which, of course, would never happen. Jesus’ point was that unforgiveness is to be avoided at all costs. Positively, we’re to forgive people because we ourselves have been forgiven (by God) more than could possibly be owed to us. We don’t forgive people because they deserve it. Rather, we forgive because of how much God has forgiven us. If this means 77 times, so be it.

It’s not an easy thing to forgive, especially if you’ve been deeply wronged. Yet if you harbor unforgiveness toward one who has confessed and sought your forgiveness, you’re making matters worse for all parties, including yourself. You’re cutting yourself off from the experience of divine forgiveness in your own life. Remember what Jesus said in Matthew 6:14-14:

Given this clear statement of Jesus, and the fact that he taught us to pray “Forgive us our debts, as we also have forgiven our debtors” (Matt 6:12), it astounds me how many Christians are mired in unforgiveness. Yes, they’ve been truly and sometimes deeply hurt by others. Therefore it’s understandable that they feel defensive and are reticent to forgive. Yet, contrary to the teaching of Christ, they build up giant walls of unforgiveness in order to protect themselves, and are unwilling to dismantle these walls. The results are dismal both for Christian community and for the souls of those who withhold forgiveness. (The utterly astounding thing to me is that sometimes the unforgiving Christians are filled with self-righteousness and consider themselves to be morally-superior to the person who wronged them and yet confessed and sought forgiveness.)

Some time ago I watched unforgiveness destroy a family in my church. The husband began the offense by being sexually unfaithful to his wife. When his offense became known, both husband and wife went through a period of attempted reconciliation. The husband confessed and asked to be forgiven. His wife said she would accept him back and forgive her. But over the next couple of years, though the husband made every effort to reconcile with hiw wife, she simply refused to forgive him. I don’t think she ever made much of an effort to do so. She would never let her husband forget his offense, bringing it up again and again. Of course I’m in no way condoning adultery, you understand. But, I believe that, in the end, it wasn’t adultery that finally broke apart this marriage. It was the wife’s unwillingness to forgive her husband.

Conversely, I have seen a number of instances where a spouse has been willing to forgive even the sin of adultery. A few years ago a couple in my church went through a horrific experience. The husband had an affair that just about killed this marriage. But he was finally willing to admit his sin and seek reconciliation. His wife, though very reticent at first, ultimately forgave her husband, truly and fully. The fact that they are married today – with a wonderfully strong and healthy marriage, I might add – testifies to the power of forgiveness.

Forgiveness is much trickier in a case where someone fails to confess to wrongdoing. At some point I’ll probably do some blogging on this particular issue, since I think it’s essential for the wronged party to let go of the hurt even in such a case. But if the person who wronged you admits the fault and seeks forgiveness, Jesus is clear about what your response must me: You must forgive. It may not be easy. And it may take a long time for the process of forgiveness to be complete. But, even as God has been lavish with mercy in forgiving you, so you are to be to the one who has sinned against you. 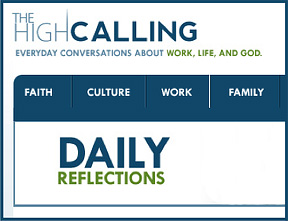 Sunday Inspiration from The High Calling: Kiss the Son!?
archives most recent
More from Beliefnet and our partners
previous posts