Brinton begins by pointing to Facebook and Google, noting that “the boundary between private and public information is becoming murkier every day.” Then he quickly shifts to the church, but not its use of technology. Rather, Brinton notes that boundaries are shifting in the church as well “because of a growing emphasis
in congregations on honest and open sharing in small groups.” In fact, Brinton admits: “I am pushing my own church in this direction, after spending a sabbatical
studying Christian hospitality while visiting congregations that are
skilled at welcoming and including people.”  Brinton is the Senior Pastor of Fairfax Presbyterian Church in Virginia.

But Brinton is concerned about this move to greater intimacy in small groups:

But I have to wonder: Is this trend a threat to privacy? Churches,
synagogues, temples and mosques have long been places where people can
escape from the world and have an encounter with God. They have
literally been “sanctuaries,” holy places — not centers for social life
or group therapy. I had a member who expressed this desire to me by
saying, “I come to church to commune with my God.” If congregations
become like Facebook, with little privacy or confidentiality, our
culture is going to lose the sanctuaries that have been sacred escapes
for thousands of years.

In support of his concern, Brinton quotes from Adam McHugh, author of Introverts in the Church. This book is a favorite of mine, and is currently being promoted in the right-hand column of my blog. McHugh shows that many of the practices of the church are not especially welcome to those who are introverted and less inclined to be drawn to contexts that demand lots of chattiness. (McHugh does advocate, however, small groups that allow for deeper sharing and committed relationships.)

As Brinton wraps up his opinion piece, he quotes from McHugh:

“Balance is key. . . . Open, honest relationships with people
you trust are hugely significant, but so are opportunities to worship
in quiet and to listen for God’s voice. Churches that have structures
and programs that support both values — since we all have both
introverted and extroverted elements to our personalities — I think
will be the most successful.”

Brinton concludes in his own words: “In order to continue to grow, Facebook and Google are going to have to
show good faith to their members, and prove that they are trustworthy.
And so will congregations that want to thrive in an increasingly
networked world.”

This is an apt comment. In my opinion, trust is one of the most important commodities for the church in today’s world. With so many institutions and leaders proving to be untrustworthy, a church that is truthful, reliable, and faithful, led by leaders with similar characteristics, will be an oasis of safety and intimacy for people who rightly wonder if anything or anyone can be trusted anymore. The church does not have to be perfect in order to be trustworthy, but it does have to be honest, admitting its mistakes when necessary. And it needs to have a history of treating people with dignity and respect. 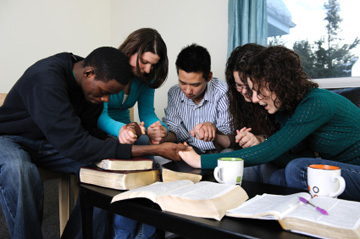 The first irony is that small groups are really not new in the church. In fact, for the first decades of Christian history, small groups were the church. There were no literal Christian sanctuaries in which Christians could escape from the world in order to commune with God. Churches met in homes and other relatively small gathering places. They were small groups in which members shared in mutual ministry, bearing one another’s burdens, suffering together and rejoicing together. The idea of the Christian church as a place where one could commune privately with God came much later in Christian tradition, and finds little support in the biblical understanding of the church.

So, it’s likely that as Brinton “pushes” his own church in the direction of small groups, there will be plenty of pushback. He testifies to this very thing: “I had a member who expressed this desire to me by saying, ‘I come to church to commune with my God.'” That’s understandable, but also problematic. From a biblical point of view, “my God” is “our God,” whom we experience in the gathering of God’s people as a necessary and central part of the Christian life. Those who want a private experience of “my God” are missing out on the main course of the Christian meal. (As you might know if you’ve been reading my blog for a while, I recently asked whether we Christians have too much privacy? This blog post is, in fact, the most visited since I moved my site to Beliefnet. Check out: Do we have too much privacy?)

I’m not saying that the church should not create opportunities for people to experience solitude and silence so as to enhance their relationship with God. This is greatly needed today. But this is not what the church is really all about, nor what gathering of the church, when seen in biblical perspective, are meant to produce.

A second irony that lurks below the surface of Brinton’s article is the impact of social media on Christian fellowship. He shows concern for introverts and their experience of church. But he does not mention that online social media are, in fact, a huge gift to introverts. Many who would not feel comfortable plunging into face-to-face Christian fellowship find in Facebook, Twitter, and similar platforms some shallow water in which to dip their toes. They can get to know people casually, slowly, as they move toward deeper intimacy and, ultimately, fully personal engagement.

So, ironically, as Brinton moves his church forward into more small group fellowship, wise use of social media might provide for many members and guests a way to moderate their relationships as they grow to trust the church and its people.

Henry Brinton is raising questions that the church desperately needs to consider. I am thankful for his thoughtfulness, and looking forward to his upcoming book on Christian hospitality.