Why Don’t We Pray for Business? Part 5

Today I want to delve into what I believe is one of the most profound reasons why we don’t pray for business. It has to do with how we think as Christians, a fundamental element of our worldview.

But first, to review, so far I’ve suggested five reasons why, I believe, we don’t pray for business in the context of corporate Christian gatherings:

Reason #2: We don’t pray for business because those who lead us in prayer have not been trained to do so.

Reason #3: We don’t pray for business because our worship leaders have been trained in settings that are indifferent or negative to business.

Reason #4: We don’t pray for business because Scripture does not command us to do so.

Reason #5: We don’t pray for business because we don’t have a vision for how business could be part of God’s business in the world.

Today I want to consider the following:

Reason #6: We don’t pray for business because we divide reality into the sacred and the secular, with prayer falling on the sacred side, and business on the secular side, and never the twain shall meet.

According to Reason #5, we don’t pray for business because we don’t have a vision for how business could be part of God’s business in the world. This lack of vision substantially reflects a lack of a biblically-informed understanding of the world and God’s mission in the world. But it also derives from a pervasive tendency in out culture and in the church to divide reality into two, distinct spheres, the sacred and the secular. For most people, including most Christians, these separate spheres of life do not overlap or influence each other. In the classic phrase of Rudyard Kipling, “never the twain shall meet.”

Most of us intuitively grasp what we mean by “sacred” and what we mean by “secular,” even though there’s plenty of fuzziness around the edges of our definitions. Sacred has to do with religious stuff: God, church, synagogue, mosque, prayer, Bible, worship, mission, belief, etc. Many of us would put things like family and marriage in the religious column as well. The sacred is spiritual, having to do with ultimate reality and ultimate meaning.  Though the sacred might touch upon tangible things (like church buildings), it has to do mostly with that which is intangible, with the ideal rather than the real. Secular, which comes from the Latin sæcularis, which means “worldly” or “belonging to this age,” refers to this world, to material objects and endeavors. The secular is transient, corporeal, practical, and real. It’s “down to earth.”

Even faithfully religious people often refer to secular reality as “the real world.” I can think of conversations I’ve had with leaders in my church. In one case, we were considering whether or not to embark on a bold capital campaign to raise money for a new sanctuary. Though the economy was struggling mightily in the early 1990s, I believed we were to move ahead with the campaign. But one of my elders responded negatively, saying something like this: “Well, having faith is just fine when it comes to spiritual things, but in the 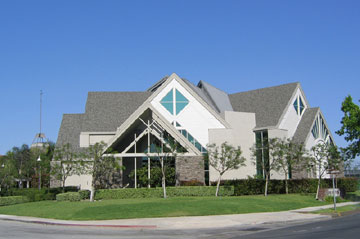 . . . .” Business was more real because it dealt with things like money, economic forecasting, and “the bottom line.” (Photo: The sanctuary of Irvine Presbyterian Church, built in 1995-1996. As it turned out, faith was just as real as finances.)

It would be an interesting to debate whether, in the end, the secular is actually more real than the sacred. C.S. Lewis, in The Great Divorce, was the first one to challenge me to think about the reality of the spiritual world. But such a debate assumes the very point I wish to challenge. It takes for granted a fundamental difference between the sacred and the secular, a difference in thinking that keeps us from seeing life as it is. (To be clear, I am not suggesting that Lewis divides sacred from secular.)

It also keeps us from praying for business, for obvious reasons. Prayer is sacred, profoundly so. Business is secular, profoundly so. Or so most of us would assume. So prayer and business simply don’t get on well together. They’re as separate from each other as oil and water, or NASCAR and Valentine’s Day. (Note: The Daytona 500 fell on Valentine’s Day this year.) We don’t pray for business because it’s just not something we pray about. To do so would be a category confusion, rather like taking your wife on a romantic date to a WWE steel cage match. Wouldn’t be prudent.

As you can probably guess, I believe that the division of life into sacred and secular is a mistake. It perceives the world wrongly because the world is not actually divided into sacred and secular. This way of thinking has come to us through Christian tradition that was saturated in classic Greek dualism. Plato and his chums saw the physical world as fundamentally different from the spiritual world, with the spiritual being vastly superior to the physical. Ideas trumped matter.

The biblical worldview, on the contrary, sees all of life as part of God’s creation, as something about which God cares and in which his glory is to be revealed. The fact that God created matter establishes its sacred character. And what was God’s first command to the first humans: “Be fruitful and multiply, and fill the earth and subdue it; and have dominion over the fish of the sea and over the birds of the air and over every living thing that moves upon the earth” (Gen 1:28). The first humans were not told to make an altar and offer sacrifices, or to sing songs of praise, or to have their daily quiet times. Rather, they were to honor God by caring for the stuff of creation. And if you think about the most literal sense of “be fruitful and multiply,” you’ll realize that our physical bodies and their function have everything to do with God. The so-called secular is enveloped and permeated by the so-called sacred, which comes to life in the stuff of the so-called secular.

If we take seriously God’s creation of heaven and earth, as well as the command of God to “be fruitful and multiply . . . and have dominion,” then we’ll begin to see the world as inescapably interconnected, rather than as fundamentally divided into sacred and secular. Business will be seen, not as secular work with little spiritual impact, but rather as part and parcel of God’s business and our business as God’s creatures. Thus it will become natural, one might almost say, spiritual, for us to pray for the marketplace and those who work within it, just as we pray for churches and pastors and missionaries and families and sick people.

I believe that the church is called to an essential task in our time of history: proclaiming that all of life matters to God, and that the division of reality into sacred and secular is biblically mistaken and practically unfruitful. Increasing numbers of people, indeed, business people, are sensing the inadequacy of a life divided into sacred and secular. They are yearning for a way to integrate their lives, to find genuine meaning in their work. This is true of Boomers like me, but even more so of folks 30 and under. According to the recently released book, The M-Factor: How the Millennial Generation Is Rocking the Workplace,
the most distinctive feature of Millenials in the workplace is their desire for meaningful work. Biblical theology provides a rock solid basis for finding meaning in every part of life, since it is all part of God’s creation and ultimately embraced in his redemption.

Before I wrap up this series, I want to suggest some practical ways we might begin to do pray for business in a way that is theologically sound and relevant to the marketplace and its people. I’ll get into this on Monday. Meanwhile, have a great weekend. Remember, even weekends matter to God!

Why Don't We Pray for Business? Part 4
archives most recent
More from Beliefnet and our partners
previous posts