The National Day of Prayer Controversy: What Would Jesus Think? Part 4

If you’ve been following my blog for the last few days, you know I’ve been posting a variety of thoughts related to the National Day of Prayer, which is today, Thursday, May 6, 2010. Included among these thoughts has been an evaluation of a “religious case” for the separation of church and state, one that would oppose a government sponsored Day of Prayer. This case was proposed in an article by Newsweek editor, Jon Meacham.

In this article, Meacham credits Jesus with originating the separation of church and state. To support this claim, Meacham points to Jesus’ refusal to be crowned as king, as well as his statement that his “kingdom is not of this world.” Yesterday, I examined in some depth the story in the Gospel of John of Jesus’ saying “No” to those who wanted to make him king. Today I will consider his statement about the non-worldly nature of the kingdom and the relevance of this statement for us, including the National Day of Prayer.

“My Kingdom is Not of This World” 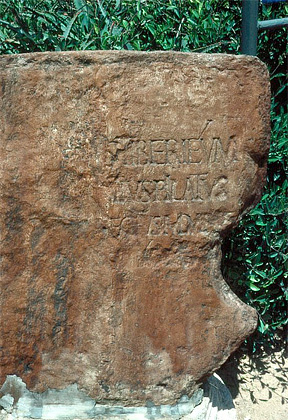 Jesus’ claim, “My kingdom is not of this world,” came in the context of the “trial” that led to his crucifixion. In John 18, the Jewish officials who sought to have Jesus killed took him to Pontius Pilate, the Roman Prefect (that is, governor) of Judea. (Photo: This engraved stone was found in 1961. It refers to [Pont]ius Pilatus as [Praef]ectus Iudaeae or “Prefect of Judea.” Image courtesy of www.HolyLandPhotos.org.)

“My kingdom is not of this world. If it were, my servants would fight to prevent my arrest by the Jews. But now my kingdom is from another place” (18:36)

The statement of Jesus translated here as “My kingdom is not of this world” is one of the most frequently misunderstood sentences of Scripture. For centuries, Christians and others have interpreted Jesus to mean: “My kingdom is not an earthly kingdom. My kingdom is heavenly, it has nothing to do with this life, only life after death.” This verse has been used to focus attention upon the afterlife and minimize the value of flourishing in this life. What Jesus was all about, we have been told, has to do with getting people to heaven, and that’s about it.

But this theology, besides ignoring the vast biblical narrative, misses the sense of Jesus’ simple statement. This can be explained, in part, on the basis of a mistranslation from the Greek of John into English (or a misunderstanding of the English translation, at any rate). The phrase “My kingdom is not of this world” renders the Greek he basileia he eme ouk estin ek tou kosmou toutou (18:36). There are two crucial translation issues here.

First, the Greek word basileia, translated as “kingdom,” usually does not refer to the place where a king reigns. Rather, it points to the king’s power or authority or reign or rule. When Jesus speaks to Pilate of his basileia, he isn’t talking about the place where he is king (i.e., heaven). Rather, he is speaking of his royal authority.

Second, the English phrase “is not of this world” is based on the Greek ouk estin ek tou kosmou toutou, which would be translated literally as “is not from this world.” Jesus was not speaking of his kingdom as existing someplace other than this world. Rather, he was saying that his kingly authority is not from this world. He was talking about the source of his sovereignty, not the location of its exercise.

So, when Jesus spoke of the kingdom of God as being close at hand (Mark 1:15), or when he taught his disciples to pray for the kingdom to come and God’s will to be done “on earth as it in heaven” (Matt 6:10), Jesus was clearly implying that the location of his kingdom is on earth in addition to heaven. But the source of his royal authority was not earthly. He was not the king because of ancestry or military might or public acclaim. Rather, his royal authority came from God.

Implications for the National Day of Prayer

Jon Meacham refers to Jesus’ saying about his kingdom being “not of this earth” without explaining how he understands “of this earth.” My guess is that Meacham rightly interprets Jesus’ meaning, since he is well-versed in the New Testament and its historical/cultural context.

In fact, Meacham’s “religious case” for the separation of church and state would find support in the “not from this world” sense that Jesus intended. The National Day of Prayer, in its current form, does indeed base its authority on this world, at least to an extent. It was instituted by the U.S. Congress and signed into law by the U.S. President. So, if one understands Jesus’ statement about his kingdom as implying that the church should not derive authorization or support from the government, as Meacham appears to do without actually arguing the point, then followers of Jesus should be careful about basing their exercise of faith on the encouragement or authorization of the government.

Having said this, I do think that the leap from Jesus statement “My kingdom is not from this world” to a theology of church-state separation is quite a long one. Meacham seems to believe that the move from Jesus’ understanding of the kingdom to our understanding of church-state relations in our time is an intuitive or obvious one. But I’m not so sure. He may well be right, but his position needs a lot more development.

For me, the fact that people are gathering today to pray is fantastic. There is no doubt in my mind that our nation needs prayer. Our political leaders do. Our business leaders do. Our teachers and educational institutions do. Our armed forces do. Our families do. Our marriages do. Our churches do. Our national allies do. Our national enemies do. I do. You do. So I’m glad we are recognizing the National Day of Prayer today. And I would be glad for this whether or not it received the endorsement of the federal government.

Surely we who believe that God answers prayer can and should gather to pray whether or not the Feds encourage us to do so. My hope, and, indeed, my prayer, is that our efforts not only will be heard by Almighty God, but also might encourage us to live today in the love, truth, and grace of God. Perhaps we who c
all out to God for peace might be encouraged to be peacemakers in our part of the world today. Peacemaking, after all, is also something commended by Jesus (Matt 5:9).

National Day of Prayer: Most Americans Give Thumbs Up; Some Baptists Give Thumbs Down
archives most recent
More from Beliefnet and our partners
previous posts