The National Day of Prayer Controversy: What Would Jesus Think? Part 2

In yesterday’s post, I summarized a “religious case for church-state separation” found in Jon Meacham’s recent Newsweek article. In support of his religious case, Meacham draws from none other than Jesus of Nazareth, whom Meacham credits with originating the idea of church-state separation. In support of this claim, he refers to two passages in the New Testament Gospels, one in which Jesus refused to be crowned as king, and the other in which Jesus said that his kingdom “is not of this world.” 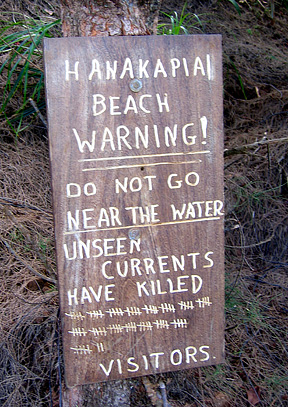 Yesterday I asked: “Do these texts support the point Meacham is trying to make? Or has he become a ventriloquist who is putting words in Jesus’ mouth?” Before I begin to answer these questions so that we might get a clearer idea of what Jesus would think about the National Day of Prayer, I’d like to offer a word of warning. (Photo: A warning sign at Hanakapiai Beach on the Hawaiian island of Kauai. Now that’s what I call a warning!)

A Word of Warning

Whenever anyone, including me, invokes Jesus in support of some contemporary cause, beware! Just about everybody wants Jesus on their side (except, perhaps, Christopher Hitchens). And just about everybody finds a way to make Jesus say what they want him to say (including Christopher Hitchens, actually. See my review of his book, god is not Great.). You name the issue and Jesus is brought forth to endorse it . . . or to denounce it . . . or both at the same time. So Jesus is pro-life and pro-choice, a Democrat and a Republican, a free market capitalist and a big government socialist, a supporter of traditional marriage and an advocate for same-sex marriage (or even a gay man). Though I haven’t bothered to look for it, I’m quite sure a few minutes of Internet browsing would lead to a website that uses Jesus to say about church and state the opposite of what Jon Meacham believes Jesus would say.

When confronted with the data I’ve just presented, some folks become stuck in cynicism and skepticism: “There’s no way to figure out what Jesus would think about current issues, so why even bother?” Many today are prepared to ignore Jesus as an inconsequential figure of ancient history. But Christians really don’t have that option. If we believe what Christians do about Jesus, and if we are seeking to model our life upon his, then we should at least try to figure out what Jesus might think when it comes to the issues of our day.

We will do this with some measure of plausibility only if we try to understand Jesus within his historical, cultural, and linguistic context. If we want to know why Jesus refused to be crowned king, for example, we need to have some sense of what was going on in first-century Jewish history that would have motivated people to try and make Jesus their king. Moreover, we must seek to interpret Jesus’ actions in light of his culture and also his teaching.

Far too often, Christians and others with a vested interest in Jesus have skipped too many steps in their effort to get Jesus to speak to current events. Not surprisingly, they stumble in this endeavor and fall short of an adequate understanding of Jesus, not to mention his relevance to contemporary affairs.

If you’ve studied biblical interpretation, you know that I have vastly over-simplified the process of trying to understand ancient texts and the characters within them. But just about all credible scholars, no matter their personal theological convictions, would agree that a faithful appraisal of a person from the past requires seeing that person in the context of his or her history, culture, and language.

I’m not suggesting, by the way, that devotional use of Scripture requires such a procedure. There is a time, I believe, when it’s quite right to reflect meditatively upon a text and let the Holy Spirit speak to our hearts. But this approach to Scripture does not provide an adequate foundation for a public claim concerning what Jesus might think about a given issue.

So, then, when I seek to answer the WWJT question, I will wrestle with the historical, cultural, and linguistic contexts in which he acted and taught. My interpretation of Jesus will be based on the text of the Gospels in light of these contexts. Yes, of course my own personal commitments will tend to shape my conclusions. So be forewarned! But, since I am at least trying to base my conclusions on the data of text and context, I am open to changing my mind when the evidence demands it.

Now that I’ve issued a warning about bringing in Jesus as a star witness in a case, I’ll examine the claims made by Jon Meacham concerning Jesus’ views of church and state. Stay tuned . . . .

The National Day of Prayer Controversy: WWJT? (What Would Jesus Think?)
archives most recent
More from Beliefnet and our partners
previous posts