Pentecost FAQ: What is the Christian Celebration of Pentecost All About?

This coming Sunday, Christians across the world will celebrate
Pentecost. In fact, not all Christians recognize this holiday (holy
day). But it is generally honored in liturgical churches (Roman
Catholic, Anglican, Lutheran, Eastern Orthodox, etc.), in Pentecostal
and Charismatic churches, and in many other Protestant churches as
well. Pentecost is not as well-known or as popular as the Christmas and
Easter, though it commemorates a watershed event in Christian history.
It many ways, Pentecost is the birthday of the church.

In
today’s post I am going to answer several frequently asked questions
about Pentecost. Tomorrow I’ll have more to say about its spiritual
significance.

For Christians,
Pentecost is a holiday on which we commemorate the coming of the Holy
Spirit on the early followers of Jesus. Before the events of the first
Pentecost, which came a few weeks after Jesus’ death and resurrection,
there were followers of Jesus, but no movement that could be
meaningfully called “the church.” Thus, from an historical point of
view, Pentecost is the day on which the church was started. This is
also true from a spiritual perspective, since the Spirit brings the
church into existence and enlivens it. Thus Pentecost is the church’s
birthday. (Photo: “Pentecost” by Jean Restout II, 1732. Public domain.) 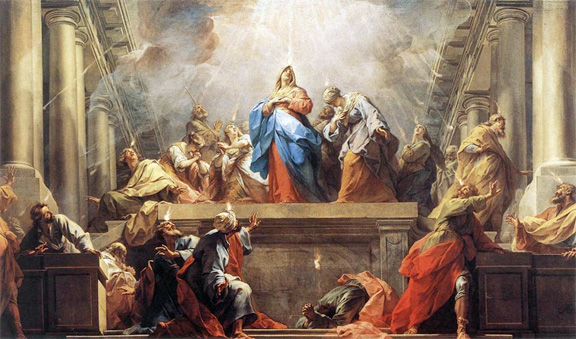 What does the word “Pentecost” mean?

But
Christians did not invent the phrase “fiftieth day.” Rather, they
borrowed it from Greek-speaking Jews who used the phrase to refer to a
Jewish holiday. This holiday was known as the Festival of Weeks, or,
more simply, Weeks (Shavuot in Hebrew). This name comes from an
expression in Leviticus 23:16, which instructs people to count seven
weeks or “fifty days” from the end of Passover to the beginning of the
next holiday (pentekonta hemeras in the ancient Greek translation of the Hebrew Scripture).

Shavuot
was the second great feast in Israel’s yearly cycle of holy days. It
was originally a harvest festival (Exod 23:16), but, in time, turned
into a day to commemorate the giving of the law on Mt. Sinai. This day
became especially significant for Christians because, seven weeks after
the resurrection of Jesus, during the Jewish celebration of Shavuot/Pentecost,
the Holy Spirit was poured out upon his first followers, thus
empowering them for their mission and gathering them together as a
church.

What actually happened on that day of Pentecost?

This
event is recorded in the New Testament book known as The Acts of the
Apostles. Chapter 2 begins, “And when the day of Pentecost [ten hemeran tes pentekostes]
had come, [the first followers of Jesus] were all together in one
place” (2:1). All of a sudden, a sound came from heaven, like a strong
wind, filling the house where the people had gathered. Something like
tongues of fire rested on their heads. “And they were all filled with
the Holy Spirit and began to speak in other languages as the Spirit
gave them the ability to speak” (2:4). (Notice the tongues of fire on
the heads of the people in the painting by Restout.)

The
languages spoken by the early Christians were intelligible (not other
worldly) and were heard by thousands of Jewish pilgrims who had come to
Jerusalem to celebrate Shavuot. The content of the miraculous
messages had to do with God’s mighty works (2:11). Many who heard these
messages in their own languages were amazed, though others thought the
Christians were just drunk (2:12).

At some point, Peter, one
of the leading followers of Jesus, stood up and preached his first
sermon. He interpreted the events of that morning in light of a
prophecy of the Hebrew prophet Joel. In that text, God promised to pour
out his Spirit on all flesh, empowering diverse people to exercise
divine power. This would be a sign of the coming “day of the Lord”
(Acts 2:16-21; Joel 2:28-32).

Peter went on to explain that
Jesus had been raised and had poured out the Spirit in fulfillment of
God’s promise through Joel (2:32-33). When the crowd asked what they
should do, Peter urged them to turn their lives around and be baptized
in the name of Jesus. Then they would be forgiven and would receive the
gift of the Holy Spirit (2:37-39). Acts reports that about 3,000 people
were added to the church that day (2:41). Not a bad response to Peter’s
first sermon!

Should we believe that all of this actually happened?

If
you are one who believes the Bible is God’s inerrant or infallible
Word, you will take for granted the truthfulness of the account in
Acts. But if you’re uncertain about biblical authority, then you might
wonder if the account in Acts is to be trusted.

In fact, some
scholars have questioned the historicity of Acts 2. They observe that
this event appears in the New Testament only in Acts, and that it
describes miraculous events that are beyond the scope of historical
inquiry. These scholars tend to view Pentecost as a powerful metaphor
for the outpouring of the Holy Spirit on the early church, rather than
as an event that gave birth to the church.

Whether we believe
the biblical account of Pentecost has everything to do with our
estimation of the historical trustworthiness of Acts of the Apostles
and the possibility of miraculous events actually happening. If you’re
familiar with my book Can We Trust the Gospels?,
you won’t be surprised to learn that I believe that Acts 2 describes
what really happened. For reasons I can’t explain here, I believe that
the author of Acts, the same “Luke” who wrote the Third Gospel, was a
reliable historian. Of course, as a Christian, I also believe that God
could send the Spirit in astounding ways and empower people to speak in
languages that they did not know.

How is Pentecost related to Pentecostal Christians?

Pentecostal
Christians have had a powerful experience of God’s presence, which is
usually accompanied with speaking in tongues (generally not a known
language). Pentecostal Christianity used to be a small segment of
Protestantism, but today it has spread throughout the world and is the
fastest growing form of Christianity. Many Christians who are not
Pentecostals nevertheless celebrate Pentecost and hope that the Holy
Spirit will renew and empower the church, though not necessarily with
the particular manifestations of the first Pentecost.

How do Christians celebrate Pentecost?

As
you might expect, there are a wide range of Christian celebrations of
Pentecost. Some churches do not recognize the holiday at all. Most
churches at least mention it in prayer, song, or sermon. Some churches
go all out, with worship focused on remembering the first Pentecost and
praying for a similar outpouring of divine power. 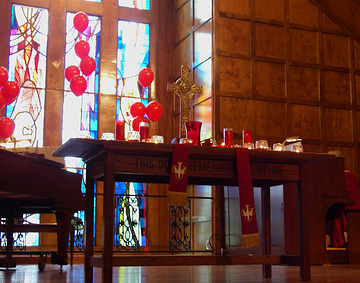 Churches
that employ liturgical colors generally use red on Pentecost as a
symbol of power and fire of the Spirit. (If you’re interested, you
might check out my chart of the liturgical year,
its seasons, themes, and colors.) A couple of years ago, my church, St.
Mark Presbyterian Church in Boerne, Texas, celebrate Pentecost with red
balloons and other symbols of the Holy Spirit. (Photo: The communion
table of St. Mark Presbyterian Church on Pentecost.)

Some
churches receive new members on Pentecost, thus commemorating the first
“new members class” that joined the church after Peter’s Pentecost
sermon. Centuries ago in Britain, those joining the church wore white
for baptism. Thus the Sunday was called “White Sunday” or “Whitsunday.”

What is the spiritual significance of Pentecost? What might God want to do in our lives and in our churches on Pentecost?

P.S. Beliefnet has a couple of interesting items for Pentecost, including an online quiz and
a post on Pentecost/Shavuot by Beliefnet blogger Rabbi Brad Hirschfield. (I got 18 of 20 right on the quiz. Can you beat me?)

Praying for Business: A Dream
archives most recent
More from Beliefnet and our partners
previous posts