Rereading a Classic: Christian Mission in the Modern World by John Stott, Part 3

Today I finish sharing some quotations from John Stott’s classic book Christian Mission in the Modern World. Toward the end of his chapter on mission, Stott focuses on the question of vocation or calling. 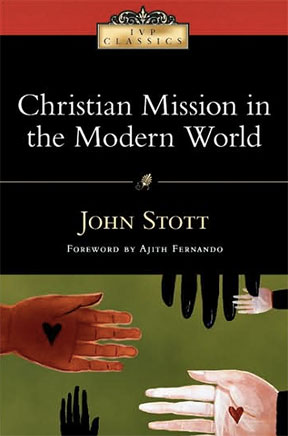 I begin with vocation, by which I mean a Christian’s lifework. We often given the impression that if a young Christian man is really keen for Christ he will undoubtedly become a foreign missionary, that if he is not quite as keen as that he will stay at home and become a pastor, that if he lacks the dedication to he a pastor, he will no doubt serve as a doctor or a teacher, while those who end up in social work or the media or (worst of all) in politics are not far removed from serious backsliding! (KL 354-357)

This much then is certain: if we are Christians we must spend our lives in the service of God and man. The only difference between us lies in the nature of the service we are called to render. Some are indeed called to be missionaries, evangelists or pastors, and others to the great professions of law, education, medicine and the social sciences. But others are called to commerce, to industry and farming, to accountancy and banking, to local government or parliament, and to the mass media, while there are still many women who find their vocation in homemaking and parenthood without pursuing an independent career as well. In all these spheres, and many others besides, it is possible for Christians to interpret their lifework Christianly, and to see it neither as a necessary evil (necessary, that is, for survival), nor even as a useful place in which to evangelize or make money for evangelism, but as their Christian vocation, as the way Christ has called them to spend their lives in his service. (KL 359-364)
Can we now liberate ourselves from the manmade bondage (for that is what it is) of supposing that every really keen Christian will devote all his spare time to some soul-winning enterprise? Surely the biblical doctrine of the body of Christ, with different members gifted to fulfill different functions, should be enough to give us this larger freedom? (KL 379-381)
If we can accept this broader concept of mission as Christian service in the world comprising both evangelism and social action-a concept which is laid upon us by the model of our Savior’s mission in the world – then Christians could under God make a far greater impact on society, an impact commensurate with our numerical strength and with the radical demands of the commission of Christ. (KL 399-401)
Final Comments
Of course there are ways in which Stott’s piece is dated, as you would expect. He speaks of the “modern” world without any mention of postmodernism. And his language is not inclusive with respect to gender. But, still, John Stott’s statement of Christian mission, and within that broader discussion, his notion of vocation, is absolutely right on.
read next post

Rereading a Classic: Christian Mission in the Modern World by John Stott, Part 2
archives most recent
More from Beliefnet and our partners
previous posts