Do I have a recommendation for you! Today marks the full release of an extraordinary album by Jeff Johnson and Phil Keaggy: Frio Suite. This instrumental collection is engaging, inspiring, quieting, even haunting. It is an extraordinary collaboration of two wonderful artists: Phil Keaggy, who is widely considered to be one of the finest guitarists in the world, and Jeff Johnson, a composer, singer, and keyboardist, who has written songs for movies (Gangs of New York, King Raven) and several Windham Hill, in addition to his own more than twenty albums. 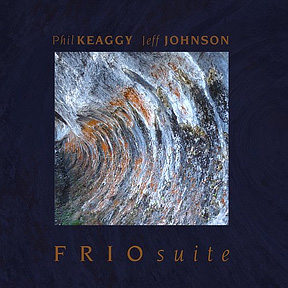 Frio Suite is the providential result of a meeting between Phil Keaggy and Jeff Johnson at Laity Lodge, which sits alongside the Frio River. These two musicians teamed up for a retreat last January. Inspired by the quiet beauty of the Frio Canyon, they decided to make an album together. Added into the mix was Kathy Hastings, a photographic artist who was in residence at Laity Lodge. She contributed artwork for the album, including the strinking cover. This photo of the cliffs along the Frio River has not been substantially altered. That’s how it looks!
Now you might think that this recommendation is biased, given the fact that the Frio Suite is an outgrowth of the work of Laity Lodge, my employer. Moreover, Jeff Johnson is a good friend. So, I’d admit that I am biased. But I had a deep appreciation for Jeff’s music years before I met him at Laity Lodge. And I’ve been a fan of Phil Keaggy for more than thirty years, though I’ve never met him. So my bias is based on the facts, just the facts, ma’am.
But if you still aren’t sure you can trust my judgment on matters of music, let me point you to John Diliberto, whose Echoes program is a favorite on public radio. Diliberto is featuring Frio Suite as his CD of the month. Here’s some of what he has to say about the album:

Johnson and Keaggy’s compositions could be reflecting the landscape of the Frio River in Texas or Hastings’ detailed macro-photos, but they play less as environmental ambiences and more as interior journeys.  Take “Ride the Stone Waves.” Johnson orchestrates a shifting, textured backdrop that includes gamelan sounds, ghost synthesizers and plaintive piano while Keaggy plays acoustic and electric guitars, deploying his intricate melodies while dropping Pink Floyd-like echoes, fuzz chord punctuations and some sinewy fretless bass.
Jeff Johnson’s sound design has never been more inventive, with often minimalist loops, Balinese cycles and ephemeral synthesizer scrims.  He remains a font of pensive, turning-to-dusk melodies. Within Johnson’s ambiences Phil Keaggy sounds like twenty different guitar players, offering country twang, folky picking, spacey ambiences and jazz-inflected changes. But it all coheres into a chamber orchestra of the imagination.
From the first piano notes to last guitar strum, Jeff Johnson and Phil Keaggy have created a nearly perfect album of deeply moving chamber music on Frio Suite.  It’s our CD of the Month for October.

If you’re still not convinced, you can check out one track of Frio Suite on YouTube, along with photos by Kathy Hastings.
[youtube:http://www.youtube.com/watch?v=KchWP2RKawI]
You can purchase Frio Suite from Amazon.com. Of you can download it from iTunes. For more music by Jeff Johnson, see his website: ArkMusic. Here’s the link for Phil’s website.

Disclosure: I did receive a complimentary, advance copy of Frio Suite. Otherwise, I am not being compensated for this review. Also Laity Lodge receives no compensation for albums sold. We are pleased to have inspired this album. That is our compensation.

read next post
Creation, Incarnation, and Online Church
archives most recent
More from Beliefnet and our partners
previous posts