Andy Crouch at Laity Lodge: What Keeps Us From Being Creative?

We had a fantastic lineup at Laity Lodge last week. Our musicians were Ashley Cleveland and Kenny Greenberg (for the second retreat in a row). Our speakers were Dr. J.I. Packer and Andy Crouch.
I expect most of you have heard of J.I. Packer. His book, Knowing God, is one of the most respected Christian books of the last half century.  It has sold well over a million copies, which isn’t bad for a book of serious theology. 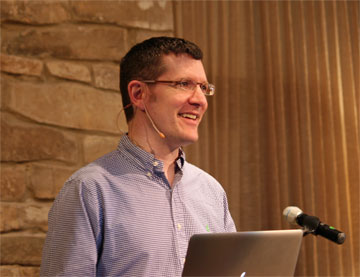 Joining Dr. Packer in the teaching role was Andy Crouch.  Andy is not as well known as J.I. Packer, but he might well be in the future. (He’s just about exactly one-half Dr. Packer’s age, so he has plenty of time to catch up.) I first became aware of Andy through his work with InterVarsity at Harvard. I never knew him personally, but his name was familiar to me. His name continued to surface over the years in association with interesting projects, such as the Christianity Today Christian Vision Project.
In 2008, Andy’s first book was published: Culture Making: Recovering Our Creative Calling (InterVarsity, 2008). This book has been highly praised, winning a “Best Books” award from Publisher’s Weekly and the Christianity Today 2009 Book Award in the”Christianity and Culture” category. In this outstanding book, Andy urges Christians to be involved in culture making, rather than settling for condemning culture, critiquing culture, copying culture, or consuming culture. Culture, in Andy’s perspective, isn’t limited to “big” things such as major motion pictures or bestselling novels. Nor is it something that only fine artists can produce. Rather, all of us, in some way or another, have the opportunity and responsibility to make culture in our segment of the world. 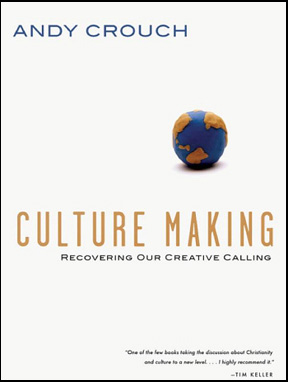 At Laity Lodge, Andy summarized the key points of his book. But he also broke new ground. One of his messages addressed the question of why we don’t engage in creative culture making, even when we feel passionate about a certain project or called by God to do it. Several of his points struck home for me, including:

1. We are distracted from cultural production by cultural consumption. How often do I fail to create because I’m watching some mindless television show or following the trivialities of my friends’ lives on Facebook.
2. We fail to invest in culture making because it is hard work. Oh, to be sure, there are times when I enjoy writing and find that words flow from my fingertips. But, most of the time, I have to work hard at writing.
3. We don’t engage in culture making because we’re afraid of failure. I find it so much more comfortable not to put myself out there because, when I do, there is always the possiblity (indeed, the likelihood) that I’ll get something wrong. And if I do, I will be criticized. And then I’ll feel bad.

I was not surprised by the fact that Andy Crouch presented many thoughtful and challenging ideas. I expected that from the author of Culture Making. And, though I hadn’t heard Andy speak before, I was not surprised by the fact that he is an excellent oral communicator. But I was surprised to discover that Andy is also a fantastic musician (pianist, singer) and worship leader. He integrated his music into his messages in an unusual and powerful way. He also “sat in” at times with Ashley Cleveland and Kenny Greenberg. If Andy was “just” a musician, I’m sure we love to have him back at Laity Lodge. But he is also one of the most interesting, thought-provoking, and personable speakers we’ve had at Laity Lodge. I look forward to Andy’s next time with us (July 22-25, 2010, along with Michael Lindsay).