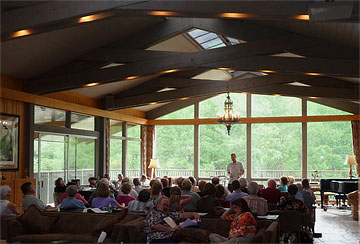 This past weekend we at Laity Lodge were pleased to host a group from Chapelwood United Methodist Church in Houston, Texas. This large, vibrant church hosts a wide array of ministries, including The Center for Christian Spirituality. The director of this center is Jerry Webber, who spoke for the Chapelwood retreat. (Photo: Jerry teaching in the Great Hall, facing the Frio River.)

Jerry, who is an experienced retreat leader, did a fine job as teacher and leader of the retreat. I was especially appreciative of his creative use of the Psalms and other poetry.  His biblical teaching was rock solid, though Jerry is more of a reflector on Scripture than an expositor. Yet it was obvious to me that he had done his expositional homework, so that his reflections were faithful to the Bible.
Jerry said many things that I will remember, but one struck me with particular impact. “Retreat is practice,” he said. “We retreat in order to practice being more attentive to God, so that when we get back to our daily lives, we can pay better attention to God.” What a great way of capturing the power of retreat! We often think of retreats as getting away from ordinary life in order to rest and be refreshed. Such renewal surely helps us to live more fully in our normal lives. But the notion of practice adds a different dimension. When we’re in a place of quiet, when the pace slows down, when we are intentionally still, we are able to listen more carefully to the still, small voice of the Spirit. This kind of attentiveness is hard to sustain in the midst of our day-to-day living. But retreat can help us practice so that we can live better lives when we’re not on retreat.
The founder of Laity Lodge, Howard E. Butt, Jr., has often said that we “retreat to advance.” The retreat is not the end or purpose. We don’t retreat merely to have a mountaintop experience (or canyon-bottom, as in the case of Laity Lodge). Rather, a retreat should help us, in some small way, or maybe in a giant one, to live more purposefully, more completely, and, indeed, more attentively.
Retreat is a way of practicing so we can live better. Do you need a retreat?
read next post 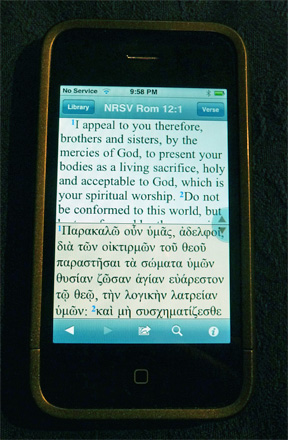 Newsweek: “Is That a Bible in Your Pocket?”
archives most recent
More from Beliefnet and our partners
previous posts