The Twelfth Station: Jesus on the Cross, His Mother, and His Disciple

Reflection
Though most of the men who followed Jesus deserted him at the cross, his female followers remained to observe his death. All four New Testament gospels mention this striking fact (Matt 27:55-56; Mark 15:40-41; Luke 23:49; John 19:25). John alone specifies that Mary the mother of Jesus was among the women who remained near him until the end. 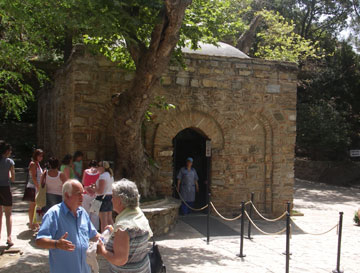 In the Gospel of John, Mary was standing next to “the disciple whom [Jesus] loved,” believed traditionally to be John, one of Jesus’ closest disciples and the source of the gospel that bears his name. Observing these two, Jesus said to his mother, “Woman, here is your son,” and to the beloved disciple, “Here is your mother” (19:26-27). The writer of the gospel adds, “And from that hour the disciple took her into his own home” (19:27). The basic meaning of Jesus’ statement is clear. He was entrusting care of his mother to one of his most intimate friends and followers. He was making sure that she would be loved and cared for after Jesus’ death. Jesus knew he could trust his beloved follower with an extremely important responsibility. (We don’t know much about the relationship of Jesus and his natural siblings at this point. Earlier in his ministry they seemed to have been less than fully supportive of His ministry [see Mark 3:21]. Later, Jesus’ brother James became one of the main leaders of the Christian church. A piece of Christian tradition holds that, at some later time, Mary accompanied John to Ephesus, where she spent her last days. A few miles outside of Ephesus in modern Turkey is a small house known as The House of the Virgin Mary. Supposedly, this was her last earthly residence. Photo: Mary’s House near Ephesus)
Commentators throughout the ages have rightly noticed Jesus’ attention to the needs of others, in this case his mother, even in his hour of excruciating suffering. This is a fine observation and surely fits with everything else we know about Jesus.
But for many years I have been struck by the thought of what Jesus’ mother must have experienced as she watched her son being crucified. I can only begin to imagine her pain. When my father was dying slowly from cancer, his mother (my grandmother) was still alive. Her anguish over her son was palpable. At one point she said to me, “I’d give anything to change places with Dave. No mother should ever have to see her son suffer like this.” I expect Mary could have said similar words as she stood near the cross of Jesus.
Yet Mary might have understood that the death of her son was part of God’s mysterious plan. The Gospels don’t tell us too much about her experience or faith at this time. She surely knew from the very beginning that Jesus was extraordinary and that God had something very special in store for him. And there were moments when she probably understood that Jesus’s destiny would not be an easy one, for him or for her. For example, in Luke 2 when Simeon praised God upon seeing the baby Jesus, he delivered a chilling prophecy to Mary, “This child is destined for the falling and rising of many in Israel . . . and a sword will pierce your own soul too” (2:34-35).
I found Mel Gibson’s portrayal of Mary in The Passion of the Christ extremely moving, partly because he didn’t overplay his hand in depicting Mary’s grief. Though her loving sorrow for her son is obvious, Mary doesn’t weep and wail and carry on. She seems to know that something like this was coming, that Jesus is doing that for which he was born. As a mother, she wants to run to him, and at one point she is able to do so. But she also understands that she cannot rescue Jesus from his fate and that, in a profound sense, she must not even if she could. Jesus has chosen to lay down his life of His own accord, believing that this is the cup his Heavenly Father has given him to drink (John 10:18; Mark 14:32-42). Mary’s strength and reserve seems to respect what her son and, indeed, what his Heavenly Father, have chosen.
As we reflect upon the meaning of Christ’s death this week, Mary’s presence at the cross reminds us of the deeply human drama that is occurring, while it points beyond to the majesty and mystery of God’s plan for salvation.
Prayer
When I think of your mother, Lord, I remember that you weren’t just the Son of God bearing the sins of the world. You were also the son of Mary, the boy whom she loved. Mary gives us a touching reminder of your humanity, Lord. Because you were truly human, because you truly suffered, you did indeed bear the sins of the world, and mine as will. All praise be to you, Lord Jesus! Amen. 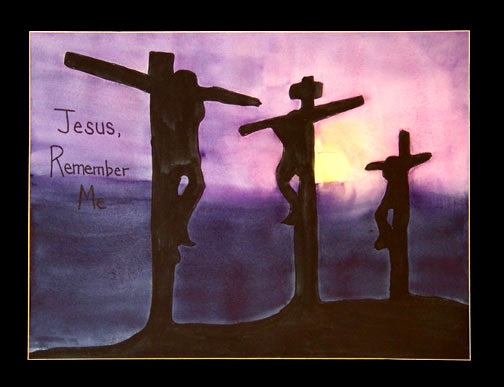 The Eleventh Station: Jesus Promises His Kingdom to the Good Thief
archives most recent
More from Beliefnet and our partners
previous posts