The Fourteenth Station: Jesus is Placed in the Tomb 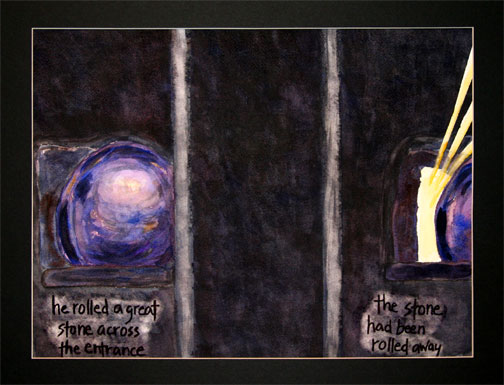 Luke 23:50   Now there was a good and righteous man named Joseph, who, though a member of the council,  51 had not agreed to their plan and action. He came from the Jewish town of Arimathea, and he was waiting expectantly for the kingdom of God.  52 This man went to Pilate and asked for the body of Jesus.  53 Then he took it down, wrapped it in a linen cloth, and laid it in a rock-hewn tomb where no one had ever been laid.  54 It was the day of Preparation, and the sabbath was beginning.

Mark 16:1   When the sabbath was over, Mary Magdalene, and Mary the mother of James, and Salome bought spices, so that they might go and anoint him.  2 And very early on the first day of the week, when the sun had risen, they went to the tomb.  3 They had been saying to one another, “Who will roll away the stone for us from the entrance to the tomb?”  4 When they looked up, they saw that the stone, which was very large, had already been rolled back.

After Jesus died, His body was placed in a tomb. This was better treatment than most crucified people would have received. Their bodies were often discarded by Roman soldiers and left exposed, unless they had families or friends nearby to care for them. The body of Jesus was fortunate enough to receive unusual attention from a man named Joseph, who was both a member of the Sanhedrin and a follower of Jesus. He made sure the body of his Master was appropriately buried, so that, later, the bones of Jesus could be finally interred in an ossuary (a special box for bones). Little did Joseph know that God had other plans for the body of Jesus.

In most human societies, appropriate burial of dead bodies is a sacred tradition. It matters profoundly that we ensure the proper resting place for those who have died. Yet, after burials happen, we don’t generally mention them specifically. My father died in 1986. I’ve spoken of his death probably 500 times since then, but I don’t think I’ve ever said “My dad died in 1986 and then he was buried.” Burial, however significant to us, is something we assume and don’t need to point out specifically. If I say “My dad died” you rightly assume that he was buried (or, perhaps, creamated and dealt with in an honorable fashion).

Therefore, it’s notable that all four biblical Gospels describe the burial of Jesus and the help of Joseph of Arimathea. Moreover, the very earliest summary of the Christian message also contained explicit reference to Jesus’ burial. The Apostle Paul, writing to Christians in Corinth about twenty years after Jesus’s death, summarized the basic Christian good news in this way:

There it sits, unadorned but essential: “and that he was buried.” Why? Why did the earliest Christians, and then why did the writers of the Gospels, consider it so important to mention the actual burial of Jesus?

To put the question a different way, what does “and that he was buried” add to the essential Christian message? For one thing, it prepares the way for the affirmation of the resurrection. To say that Jesus died and was raised without mentioning his burial could lead to a misunderstanding of the story. One might think that Jesus was immediately brought back to life from the cross, or that he was immediately jettisoned to heaven. “And that he was buried” eliminates these options, and explains the place from which Jesus was raised.

But, more important by far, the mention of the burial of Jesus makes it absolutely clear that Jesus really died on the cross. He didn’t just appear to die, as was once proposed by Hugh Schoenfield in his bestselling book, The Passover Plot. Schoenfield’s “swoon theory” has been discredited by scholars of all theological stripes. Whatever else can be known about Jesus, all the evidence, from both biblical and extra-biblical sources, points to the simple fact that he really died upon the cross. When the earliest Christians proclaimed the burial of Jesus, they were saying, in effect, that he really, really died. Had Charles Dickens been among the first Christians, he might have written that Jesus was a dead as a doornail, just like Jacob Marley. (Or would it have been a “cross-nail”?)

I don’t mean to suggest that Jesus’ death, a fairly mundane historical fact, is easy to parse out theologically. After all, Jesus was not just a man, but the God-man. He was the Word of God in flesh, the One in whom was life and who was the source of all life (John 1:1-14). The Jesus died physically, and that, in the process, he suffered the penalty of spiritual death for sin, are mysteries far beyond our ability to fully fathom. How could the One who was the Way, the Truth, and the Life actually die? How could the Author of Life lose his own life?

I don’t propose to answer these questions. I’ve been a Christian for over forty years and they still perplex me . . . and call me to wonder . . . and invite me to worship. Perhaps one of the best responses to the mystery of Christ’s real death was penned by Charles Wesley early in the eighteenth century. I’ll close with the words of his beloved hymn, “And Can It Be That I Should Gain?” I can think of no better way to finish this reflection on the fourteenth station of the cross. The main purpose of The Stations of the Cross is to draw us more deeply into the reality, mystery, and mercy of the cross, so that we might experience the love of God more truly and powerfully.

And can it be that I should gain
An interest in the Savior’s blood?
Died He for me, who caused His pain–
For me, who Him to death pursued?

‘Tis mystery all: th’Immortal dies:
Who can explore His strange design?
In vain the firstborn seraph tries
To sound the depths of love divine.

He left His Father’s throne above
So free, so infinite His grace–
Emptied Himself of all but love,
And bled for Adam’s helpless race:

Still the small inward voice I hear,
That whispers all my sins forgiven;
Still the atoning blood is near,
That quenched the wrath of hostile Heaven.

No condemnation now I dread;
Jesus, and all in Him, is mine;
Alive in Him, my living Head,
And clothed in righteousness divine,

Lord Jesus, today we remember the fact that your death wasn’t some charade. Rather, you really died. Thus you experienced the ultimate penalty for our sin . . . for my sin.

I’ll never be able to understand fully the wonder of your death. But I can grasp the fact that your real death opened up the door for me to experience real life. Faced with such a merciful mystery, I cry: “Amazing love! How can it be, that Thou, my God, shouldst die for me?”

To you be all the praise and glory! Amen!

read next post
The Thirteenth Station: Jesus Dies on the Cross
archives most recent
More from Beliefnet and our partners
previous posts