As my regular readers know, I don’t tend to do serious blogging on Saturdays. But today I do want to put up something that is vaguely related to my recent series on the PCUSA and denominations. 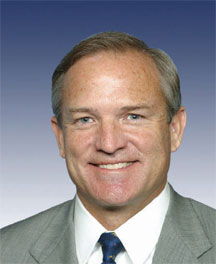 I’ve been watching with interest the hype surrounding Barack Obama’s imminent announcemet of his running mate. One of the leading candidates is Congressman Chet Edwards of the 17th Congressional District in Texas (not my district). I hadn’t heard of Rep. Edwards before, so I went to his website to learn more about him. I scanned his impressive bio, the last paragraph of his reads:

I had to read this twice to make sure I understood it. “Chet is a lifelong Methodist.” I got that part. But he attends two Baptist churches. What a curious inconsistency!
I’m not suggesting anything negative about Chet. It may well be that his wife is a Baptist, and that he has chosen to go to the churches of her choosing. There are lots of reasons why Methodists might end up at Baptist churches. I don’t have a problem with this sort of transition. Indeed, I’m glad to see the Rep. Edwards is a faithful churchgoer. (By the way, John McCain grew up as an Episcopalian, but now attends a Baptist church.)
It is telling, however, that a lifelong Methodist ends up worshiping in a Baptist church. This illustrates the fact that most American Christians aren’t especially limited by or even committed to their denominations. For the most part, denominations mean something to those who are greatly involved in them (clergy, denominational officials, etc.), but relatively little to their members. Any conversation of denominations and their future must take seriously the fact that denominational brand loyalty is dying. Some would say it’s already dead.
What I find even more curious in the description of Rep. Edwards’ church affliation is the fact that he is called a “lifelong Methodist” even though he’s not attending Methodist churches. It would seem more accurate to describe him as a former Methodist who is now a Baptist. The odd inconsistency in this paragraph bears further testimony to the way most Christians think of their denominations. Denominational labels just aren’t a big deal. Period. Lifelong Methodist in Baptist churches. Lifelong Baptist in Methodist churches. Who cares?
Well, I just did a bit of digging, and found a partial explanation to the riddle of Rep. Edwards’ denominational affiliations. In an 2003 interview with the Baptist Standard, he was asked about the importance of faith in his life. His answer included the following:

It is a central part of my life and of my family’s values. I was born and raised in the Methodist church, but 10 years ago I married a Baptist preacher’s daughter, and though I am still a Methodist today, our family has attended Baptist churches in Virginia and Texas the last 10 years.

So I guessed right! A lifelong Methodist who marries a Baptist preacher’s daughter would be wise to attend Baptist churches. Give Rep. Edwards ten points for his commitment to and respect for his wife. It is telling, though, that he still calls himself a Methodist, even though he has been part of Baptist churches for the last ten years. I’d love to ask him why he hasn’t joined one of his Baptist churches.
In his interview with the Baptist Standard, Rep. Edwards added,

One of the challenges is trying to set a good Christian example in public office without wearing religion on my sleeve. I think it is sacrilege when politicians use religion to their own political ends. That demeans religion. It is a constant struggle trying to set a good Christian example and trying to reach out to others with my faith while not showing disrespect by furthering my own political ends.

If he ends up as Barack Obama’s running mate, I wonder how he’ll do in an election that seems to want candidates to wear their religion on their sleeves.

read next post
What’s Good About Denominations? Revisited
archives most recent
More from Beliefnet and our partners
previous posts