First of all, let me be clear that I am not a doctor. (Well, okay, I have a Ph.D. But I’m not a medical doctor.) One should never take my medical advice too seriously.
Second, let me add that I’m generally very suspicious of “home remedies” for bodily ills, especially when they’re found on the Internet. There is no end to the nonsense out there.
But, I have found on the Internet what I’m beginning to think is a miraculous cure for bug bite itching. (Okay, okay. It’s not miraculous in the strict sense. Just surprising and wonderful.)

A little background: I am quite allergic to bug bits and stings. I have to be especially careful with bee and wasp stings, to which my body overreacts big time. But even less major bits, like mosquitoes, often lead to an unusually strong response. Where most folks get little bumbs that itch for a few hours, I can get large welts that itch terrible for days. It’s much worse with spider bites and the like.
The bad news for me is that I now live in Texas, in the country, no less. My love to the outskirts of Boerne must have brought cheers to the insect kingdom, because bugs love to bite me, and there are tons of them where we live. We’ve got the usual bees and wasps, plus mosquitoes, biting ants, fire ants, chiggers, spiders, noseeums, etc. etc. The mosquitoes haven’t been too bad. But I’ve had my share of chigger and ant bites, mostly because I haven’t been careful.
In my itching agony a few weeks ago, I decided to do some Web surfing to see if I could find some relief. I’d been using the typical treatments – hydrocortisone cream, Benadry cream, etc. – with modest success. But I wondered if I could find something better. As I surfed around, I started running into lots of people who found heat to be helpful in reliving itches. Here are some examples: Poison Ivy; People’s Pharmacy; Home Remedies.
This is ironic, of course, because heat often causes itches (heat rash, etc.) or can make them worse. But many people testified the applying significant heat to an itch for a short amount of time made the itch disappear for several hours, maybe even longer. I was skeptical, but figured it would be worth a try. I had been gardening in sandals, and had been foolish enough not to apply insect repellent to my feet. I got about a dozen ant bites, which soon became swollen centerpoints of major itching. My lotions were not helping. So I decided to try heat.
Some of the proponents of heat therapy for itches recommend using very hot water, not so hot as to burn the skin, but just a little cooler than this. Others swear by hair dryers. They recommending pointing a hair dryer at an itchy spot for several seconds or minutes. The skin should become uncomfortably hot, but not anywhere near being burned. After this heating of the skin happens, the itch is supposed to go away.
I got out my wife’s hair dryer and followed the instructions I had found online. I heated up one of my worst bites for about a minute. My skin felt hot and began to hurt. But I was careful not to burn myself. When it seemed like I had done enough, I removed the hair dryer and waited to see what would happen. In a few more seconds, it seemed like the itch had completely disappeared. But I thought I might be doing a mind over matter trick, so I decided to treat my other bites and see what happened. In about five minutes I had blown dry all of my bites. And it felt as if I had no more itching, just some residual warmth. About ten minutes later the feeling of warmth had vanished, and so had my itching. Completely. I felt amazing relief. And it continued for probably six hours. Then I did a second treatment, and that was pretty much the end of itching. The bites were still there as nasty little welts. But I had no discomfort. Now, about three weeks later, they are healing up much as they would ordinarily.
Since that first experiment, I’ve treated a few more bites with the same results. I’m quite sure I’m not fooling myself with wishful thinking. Heating up a bite and the area right around it with a hair dryer really does seem to take away the itch. 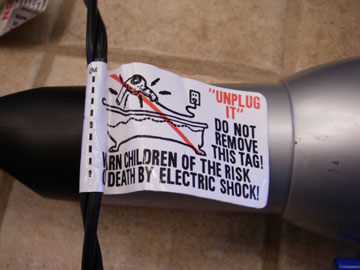 I’m sharing my findings with you because it’s summertime, and the bugs are hungry. If you try the blow-drying method and it brings relief, then I’m glad. I do realize there’s some risk in putting this up online. If you do something stupid and burn yourself with your hair dryer or get electrocuted, you or your heirs will probably want to sue me. So let me say, once again, that I am not a medical doctor. I don’t know if there are any long-term disadvantages to this method of itch relief (other than that it uses electricity which adds to global warming). And whatever you do, don’t burn yourself. Be sure to read and follow all the warnings that come with your hair dryer. Don’t do what I’m recommending while sitting in a bathtub. Don’t do it in a rainstorm. Don’t do it while standing up high on an aluminum ladder. Don’t do it while driving in a car or talking on a cell phone. Don’t do it while filling your car with gasoline. Don’t do it while using mind-altering prescription drugs. Etc. etc. etc. Fill in your own legal boilerplate.
If you try this and it works for you, please add a comment to this post. If you try it and it doesn’t work, ditto. And if you have some other sure fire method itch relief, let us know. Good luck!
read next post
The Growing Church: Part 2
archives most recent
More from Beliefnet and our partners
previous posts