You Know You’re in a Small Town When . . . More from the Boerne Police Blotter

April 4
544 mile marker Interstate 10, 8:42 p.m., Police stopped a vehicle and arrested the driver for possession of marijuana. A passenger was issued a citation for an open container. [MDR: An open container? Of what? Or is it illegal in Texas simply to have any open container in your car: peanuts, jam, etc.?]
April 7
400 block of W. Bandera, 9:08 a.m., A man pulling into a parking space at H-E-B said his foot slipped off the brake pedal and hit the accelerator. That caused the vehicle to jump over a curb and strike a tree. No injuries were reported. [MDR: But what about the tree’s injuries?]

April 16
600 block of Rosewood, 11:50 a.m., After police received two reports of a white Toyota being driven recklessly, a caller was able to direct officers to a house where the vehicle was located. Officers identified the 18-year-old driver and advised him about his driving habits. The driver was also issued a citation for minor consumption of alcohol. [MDR: Is it illegal in Texas to consume minor amounts of alcohol? Apparently so.] 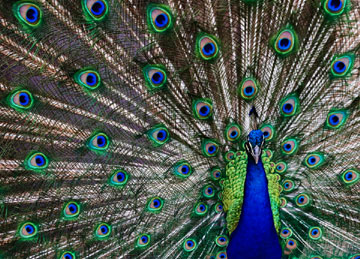 May 2
Ammann Road, 9:27 a.m., A caller reported having problems with a neighbor’s peacock coming onto her property. [MDR: Pesky peacock!]
May 3
29000 block of Ralph Fair Road, 1:45 a.m., While on patrol, an officer located an unattended vehicle parked at Fair Oaks Ranch Elementary. A not on the car indicated that the vehicle was broke down and would be retrieved the next day. Police ran the tags on the vehicle and found that the license belonged to another car. [MDR: Oops. Boerne Star editors: Did you mean a “note” on the car that was “broken” down?]
May 8
200 block of W. Lohmann, 2:58 p.m., An officer was called to the school to help with a child that was kicking and trying to hit the faculty. [MDR: The faculty? The whole faculty? That’s one angry kid!]
700 block Water Street, 10:51 p.m., A caller reported a man laying in her front yard unconscious. [MDR: If he was unconscious, he was probably lying in her yard, to be more lexically precise.]
read next post
Recommendation #2: Look for a church that is essentially orthodox, unless . . . .
archives most recent
More from Beliefnet and our partners
previous posts