What Should You Do If Your Preacher Falls Prey to Pulpit Pride?

Part 4 of series: Pride and the Power of the Pulpit
Permalink for this post / Permalink for this series
As I wrap up this series on Pride and the Power of the Pulpit, I want to speak practically to those who find themselves in a situation not unlike that of Barack Obama. What should you do if your preacher gets puffed up with pulpit pride and begins to speak irresponsibly? Should you just sit there and take it out of loyalty or inertia? Should you leave the church? Or ???? (Photo: I’m preaching at Irvine Presbyterian Church. I hope without pulpit pride.)

It was easy for many to criticize Barack Obama for staying in Trinity United Church of Christ when his pastor, Jeremiah Wright, was preaching irresponsibly. I must confess that I found his willingness to stay at the church for so many years to be perplexing, given what seems to have been Rev Wright’s history of irresponsible communication. However, at the same time, I can appreciate Obama’s commitment to the Trinity congregation even when its pastor was a rhetorical loose cannon. Church, after all, isn’t primarily about the preacher. It’s a community of people who have pledged faithfulness to each other. If you’re committed to your church, then your instinct should be to remain in that church even if the pastor runs off at the mouth at times. Yes, yes, there may be a time when leaving a church is necessary. But such a decision should not be a Christian’s first move when the preacher gets out of bounds.
So what should you do if your preacher says things from the pulpit that you find irresponsible?
If the offense is minor and rare, you might want simply to ignore it. Pastors say a lot of things, and deserve, in my opinion, a measure of grace and forgiveness when they mess up in relatively minor ways. If your pastor messes up every now and then, and not in major ways, then perhaps all you need to do is to pray more faithfully for your pastor.
However, even if the preacher’s offense is minor and rare, if you can’t let go of your negative response to it, then you should not ignore it. Unexpressed resentment or anger with your pastor will keep you from hearing God’s word through that pastor’s preaching.
If you can’t ignore your preacher’s irresponsibility, or if you have been truly offended by it, then you need to do what Jesus commands of his disciples in Matthew 18:

“If another member of the church sins against you, go and point out the fault when the two of you are alone. If the member listens to you, you have regained that one” (Matt 18:15).

Note carefully that you’re to speak to the preacher when the two of you are alone, not in the receiving line after worship, not on the patio. Note also that you are not to gossip about your concerns to others. Usually when people in church are upset with their pastor, they make sure others hear about it. Jesus says you’re to go straight to the one who offended you, in this case, to your preacher. Furthermore, note that you’re to be focused in your communication. “Point out the fault,” and only the fault. Don’t use the occasion of this discussion to bring up other frustrations with your pastor. Finally, note the point of the conversation: reconciliation. You’re to seek to “regain” a healthy relationship with your pastor.
Of course there are times when one who sins against another will not listen when confronted in private. If this happens to you in your conversation with your pastor, it still isn’t time to leave the church. And it still isn’t right to gossip. Rather, Jesus says:

“But if you are not listened to, take one or atwo others along with you, so that every word may be confirmed by the evidence of two or three witnesses” (Matt 18:16.

I’d urge you to ask one or two mature Christians, perhaps elders of the church, to join you for another conversation with the pastor. Those people will also be able to help you determine whether your offense is warranted. Once again, the intent of this conversation is reconciliation.
If that still doesn’t happen, then things get tricky. Jesus says “if the offender refuses to listen to them, tell it to the church” (Matt 18:17). Most churches today have a layer of leadership that wasn’t present in the time of the earliest church, a board of elders or deacons or something similar. In my opinion, your best move at this point would be to communicate in an official way with the board, probably through a letter. It will be the responsibility of the board to confront the pastor about any irresponsible preaching.
Now I realize that reality can be pretty messy. Some churches don’t have boards. Some boards are under the thumb of the pastor. Some pastors will never listen to criticism. Etc. etc. etc. But, in my personal experience, as a preacher, a friend of preachers, and a listener of thousands of sermons, most preachers really want to say and do what is right. If they have been irresponsible, many will admit it and make amends. The result of this process can be a wonderful one, not only for the person offended by the preacher, but also for the preacher and the church.

So when should you leave a church because of a preacher’s irresponsible preaching? I don’t think there’s an easy, one-size-fits-all answer to this question. I can imagine situations in which people decide to remain in a church where a preacher occasionally messes up for lots of godly reasons. It would be a major problem for me if those mistakes had to do with central theological issues. I could take a measure of anti-patriotic fervor in my pastor far more easily than I could stomach heresy.
Curiously enough, the sermon tidbits that got Jeremiah Wright into trouble were not theological teachings so much as social commentary. Wright wasn’t denying the deity of Christ or salvation through Christ or something essential to orthodoxy. Rather, he was espousing views about the U. S. government and American society in general that were negative and, in my opinion, eccentric. It seems to me that a preacher who gets the theology right but says some kooky things about society deserves more grace than a preacher who preaches theological heresy but does so with exuberant patriotism. (I have not studied Rev. Wright’s theology enough to know where he stands with respect to historic orthodoxy.)
If you decide that you need to leave a church, I’d urge you to do so with as much grace and kindness as you can muster. Throughout my years at Irvine Presbyterian Church, there were people who left the church largely because of me. That was hard for me, as you can imagine. But some who left did so in a way that honored our relationship and my pastoral role. They came to me, explained honestly why they were leaving, but without unnecessary criticism. They found things to affirm in my ministry, and I was able to return the favor. Though our parting was painful, it was healthy for all involved, including the church. Moreover, their kindness and responsibility made it so much easier when we ran into each other at Starbucks or wedding receptions. 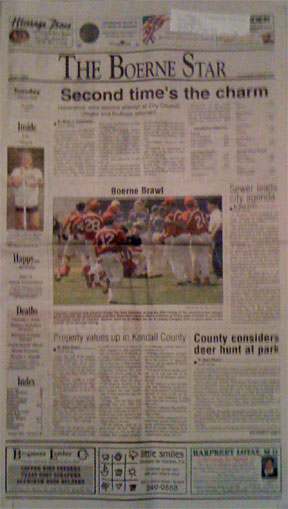 Headlines You Don’t See Every Day . . .
archives most recent
More from Beliefnet and our partners
previous posts