The Power of the Pulpit

It seems like everybody’s talking about preaching these days. To be more specific, everybody’s talking about one particular preacher, the Rev. Jeremiah Wright, whose fifteen minutes of fame derive both from his association with Barack Obama and from his tendency to make outlandish statements in the pulpit.
Most of the commentary on Rev. Wright has focused on the implications of his preaching for the presidential candidacy of Obama. At the moment, these implications are not happy ones for the Obama campaign. The front page of today’s New York Times features a survey that shows plummeting confidence in Obama and growing support for his Democratic rival, Hillary Clinton. Much of this is attributed to the impact of the Jeremiah Wright controversy.

I don’t propose to weigh in on these issues because they are beyond my field of expertise. I don’t know all that much about presidential politics. But I do know something about preaching. Not only have I heard hundreds upon hundreds of sermons in my life, but also I have preached hundreds upon hundreds of sermons as a pastor for over twenty years. So I want to comment on some of the issues raised by Rev. Wright’s preaching. These issues can be summed up in the title “Pride and the Power of the Pulpit.”
As most of my blog readers know, last September I finished my sixteen-year-plus tenure as the Senior Pastor and primary preacher of Irvine Presbyterian Church in Southern California, where I preached well over six-hundred individual sermons (including repetition, that was more than eighteen-hundred sermons). I don’t do much preaching in my new role as the Senior Director and Scholar-in-Residence for Laity Lodge. Since September, I’ve spoken often to various groups (retreats, conferences, seminars), but I’ve only preached three sermons (six times in total, with repetitions). 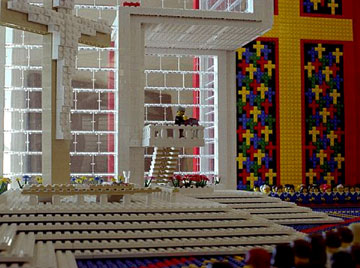 Last weekend I preached for the first time in my new church, a church in which I am active along with my family, but not as a pastor. When I got up into the pulpit for the first time in that church, I was struck by how much higher I was than the people. I was peering down upon them as they were gazing up at me. By virtue of the sanctuary design, I was in a position of considerable implicit power. (Photo: The pulpit in Amy Hughes’ legendary “Lego Church.”)
As I preached, I was impressed by the fact that communication flowed in one direction. I talked; they listened. Of course that’s almost always the way it happens in preaching, but I used to take this for granted because I was so accustomed to it. Now, since I do more teaching of an interactive nature, when I was preaching I sensed the absence of feedback. (Ironically, given the recent prominence of Rev. Wright, the black church is one setting in which the congregation often speaks back to the preacher. Usually these are words of encouragement, though when I once preached in a black church, I heard one woman who kept on praying, “Help him, Jesus!”)
At the end of my sermon in my home church, there wasn’t a time for Q & A. I had the last word. There was no corporate conversation about anything I had said, no opportunity for people to ask questions or to challenge my assertions. I said it. They were to believe it. And that settled it. Or that’s the way it felt, at any rate. As I greeted people after the service, they had the opportunity to share their responses to my preaching. By tradition and politeness, these were mostly of the “Nice sermon, pastor” genre. If anybody was unhappy with what I had said, they had the decency to keep it to themselves.
Now what I’ve just described isn’t unusual. It’s the norm in the vast majority of churches throughout this country. Preachers preach and parishioners listen. That’s the way we do church. In this equation, the preacher is given unusual power, the power of physical elevation over the congregation, the power to have people listen with extraordinary attention, the power to say whatever the preacher wants without being challenged or questioned, the power to speak without having to listen to othersa. (Yes, yes, I know that good preaching actually requires several kinds of listening. But the preacher is not expected to listen to the congregation in the context of the typical worship service.)
You might think I’m leading up to a critique of this preaching power equation. Actually, I’m not, at least not necessarily. I believe that preaching with power can be one of the greatest things in the world. Indeed, it can be a way for a pastor to serve people, not to mention God. I also believe that preaching of God’s truth comes with God’s own power, the power of the Holy Spirit at work in both preacher and congregation. I think this is fantastic.
The point I’m making right now is simply that the preacher has been given a great deal of power by virtue of position, authority, tradition, and the willingness of the congregation to listen to a sermon. This power can be a wonderful thing. But it can easily be abused. One kind of abuse happens when the preacher gets caught up in the pride of preaching. I’ll talk about this in my next post in this series.
read next post