Sunday Inspiration from The High Calling.org

Joseph prepared his chariot and traveled to Goshen to meet his father, Jacob. When Joseph arrived, he embraced his father and wept, holding him for a long time.

What a touching scene! After years and years of separation, Jacob was finally reunited with his beloved son, Joseph. It comes as no surprise, given what we have seen of Joseph’s strong emotions, that he wept profusely, holding his father for a long time. We’re not told how Jacob felt, only that he finally said to Joseph: “Now I am ready to die, since I have seen your face again and know you are still alive” (v. 30).
I can’t read this story without thinking of a similar one in the New Testament. Jesus told the story of a son who was separated from his father for a long time. In this case, the son had chosen the separation, much to his father’s pain and dishonor. When the son finally returned, he was reunited with his father. Here’s what happened:

“So he returned home to his father. And while he was still a long way off, his father saw him coming. Filled with love and compassion, he ran to his son, embraced him, and kissed him” (Luke 15:20). 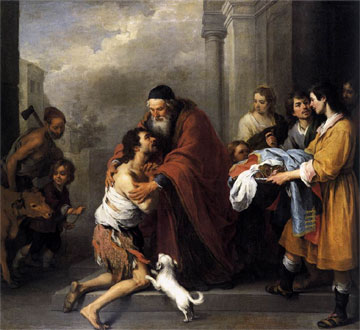 Here we see an emotional reunion between father and son, complete with a passionate embrace. But there is a difference between this picture and the one in Genesis 46. There, the son hugged the father. Here, the father initiates relationship with the son, running to him and enfolding him with love. (Photo: Bartolomé Esteban Murillo, “Return of the Prodigal Son” 1667-70 AD)

Perhaps the most stunning part of this picture of a family reunion is its meaning according to Jesus. The running, embracing father reveals God’s own heart for us. When we return to the Lord, he runs to embrace us home. What a wonder!
QUESTIONS FOR REFLECTION: How do you picture God and God’s relationship with you? Is God the apparently staid Father who, like Jacob, receives your love but doesn’t respond in kind? Or is God like the father in Jesus’ parable, who runs to you, embracing and kissing you?
PRAYER: Dear Heavenly Father, as a human father, this scene of Joseph’s reunion with Jacob touches my heart. But so much more am I moved by Jesus’ story of the father who runs to and embraces his son. When I consider that this image reveals your love for me, I am truly astounded. It’s hard to imagine that I mean that much to you. Yes, yes, I believe it theologically. But my heart lags behind.
Help me, dear Father, to live each moment as if you cherished me and delighted in my presence. Amen.
Daily Reflections from The High Calling.org
This devotional comes from The High Calling of Our Daily Work (www.thehighcalling.org). You can read my Daily Reflections there, or sign up to have them sent to your email inbox each day. This website contains lots of encouragement for people who are trying to live out their faith in the workplace.