From the police blotter of the Boerne Star News:
January 7
100 block of First Street, 2:40 p.m., An officer was flagged down by a man who said he gave $900 to two men who said they were taking his money to the bank and would return with a check for him. [MDR: Note to self: Never give money to strangers who promise to take it to the bank for me.]
Jan. 6
500 block of Roosevelt Avenue, Comfort, 11:45 a.m., A woman reported that her neighbor is mowing his yard and deliberately throwing the cuttings on her car. [MDR: As if it were possible for the man to be throwing the cuttings on her car without doing it deliberately?]

Jan. 8
200 block of Lohmann, 7:53 p.m., A caller reported kids in the area setting off fireworks. Police were unable to locate the children. [MDR: You tell your kids, “Don’t play with fireworks, you’ll blow yourself up.” And then one day it happens.]
Jan. 10
29000 block of No Le Hace Drive, 6:14 p.m., A woman reported being approached in a bank drive-through by a man selling steaks. The woman refused to buy any and followed the truck to the parking lot at Anytime Fitness where the driver and a passenger again offered to sell meat to her. [MDR: First, notice the street name: No Le Hace. That’s Spanish for “It doesn’t matter.” I wonder if we have “Hakuna Matata Street”? Second, we don’t learn what kinds of steaks they were. Nuts. Third, after the woman declined, she followed the truck so the people could hassle her again. Huh? Note to self: If somebody tries to sell me steaks, don’t follow him to the next place.] 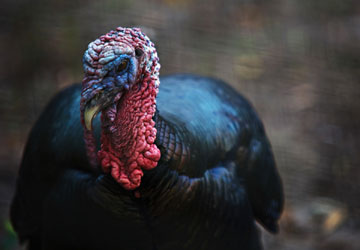 Jan. 14
N. Front Street, Waring, 4:46 p.m., A man reported that his granddaughter was attacked by a turkey when she got off the bus. [MDR: Hey, no name calling. Just because some guy attacked a girl, that’s no excuse for calling him a turkey! Oh . . . . What? . . . . I guess it was a real turkey. A city boy mistake. Never mind! Photo: Copyright Â© Rod Pasibe (Rights purchased from iStockphoto.com]
Jan. 15
100 block of S. Main St., 7:49 p.m., A caller reported a white Dodge Dooley in the parking lot behind the Benefit Planners building doing doughnuts. Officers contacted the driver and gave advice. [MDR: Now there are some fine cops! No threats. No tickets. Just free advice. PS: A Dodge Dooley is a kind of truck.]
Jan. 16
Highland and Water streets, 8:15 p.m., An officer observed a suspicious vehicle parked at the Optimist Park with fogged windows. Officers contacted a 40-year-old man and a 34-year-old woman who told police they had been making out. Both were released. [MDR: No comment.]
Jan. 29
29000 block of Ralph Fair Road, 6:28 p.m., While on patrol, police were notified of a vehicle that was being sought by Kendall County deputies after the driver reportedly slashed the tires of another vehicle at the Bergheim Store. An officer observed a vehicle, which matched the description, leaving the Exxon Market. Police stopped the vehicle and questioned the driver, who admitted he slashed the tires because the driver was â??driving reckless and endangering his life, his girlfriendâ??s life and the lives of everyone on the road.â? The man was turned over to county deputies. [MDR: Note to self: Don’t be a vigilante, even if someone is endangering the lives of everyone on the road.]
read next post
Gordon Fee on Rejoicing in the Lord
archives most recent
More from Beliefnet and our partners
previous posts