Today I received a dozen or more emails from friends, including a comment from my mother, who had received a peculiar email promotion from Amazon.com. It read, in part: 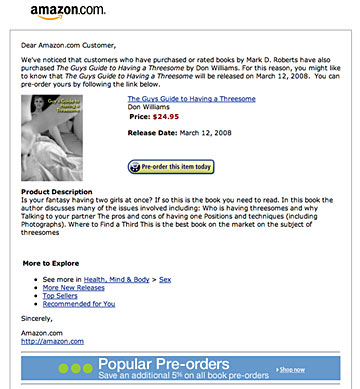 No, this is not a sick joke. It is a genunie Amazon.com promotion. Ugh!
Like most Internet-connected folks in today’s world, I’m used to getting ugly spam in my inbox. But usually this comes from some questionable source overseas, not from a credible American company. I must say I’m insulted on behalf of those who have bought my books. I think it’s highly unlikely that many of these folks have purchased a book that instructs someone in sexual perversion.
I’m pretty sure I know why Amazon sent this promotion. It has to do with the name of author of the Threesome book, Don Williams. There is another author named Don Williams who has written several outstanding Christian books. In fact, I highlighted one of his books, Start Here, in a blog series I did a year ago. If you visit the Start Here page at Amazon.com and scroll down to “Customers Who Bought This Item Also Bought,” you’ll see five of my books listed.
When Amazon.com sends out promotional emails, I seriously doubt that any human being creates or even monitors them. The Amazon computers use a certain algorithm that matches potential buyers with new books. I expect the Amazon algorighm doesn’t distinguish between the different Don Williamses. So, as far as Amazon is concerned, buyers of books by Mark D. Roberts are likely to buy books by someone named Don Williams, no matter whether that Don Williams is an outstanding Christian pastor or a sleeze-bag who advocates immoral sexual activity.
So, for the record, let me say that:

1. I am quite sure that buyers of my books are not buying the Threesome book.
2. The Don Williams who has written excellent Christian books such as Start Here is no relation to the Don Williams who promotes sexual perversion. I guarantee it.
3. Amazon owes my book buyers an apology, since they were virtually libeled by the Amazon.com promotion. I wrote a note of complaint to Amazon asking for an apology to be sent to all who received the promotion. I haven’t heard back from them.
4. Amazon should improve its algorithms.
5. If you received one of those promotions, I’d encourage you to let Amazon.com know you didn’t appreciate it. Here’s a link to their customer service.
6. Things like this happen in life. Names get confused by computers, also by people. I remember a phone conversation I had some years ago with an agent of the IRS. He was looking for a Mark Roberts that owed lots of money for back taxes, but had flown the coop. I spent several minutes trying to convince the agent that I was not that Mark Roberts, and that he was wasting his time. Finally he stopped hassling me.

7. Don’t take anything you receive in your email inbox at face value. Ever. Increasingly, I’m receiving spam from . . . me. That’s right. I’m getting junk spam from mark@markdroberts.com. At least that’s how it looks.
8. We live in a sad and sick world. But the only way we’re going to be salt and light in this world is by being out there in it. There will be times when we get slimed in the process. We should expect it.
9. If you received one of those promotional notices, don’t buy that book! Order Start Here by the other Don Williams instead.

read next post
Why I Donâ??t Say â??In Jesusâ??s Nameâ? at the End of a Civic Prayer
archives most recent
More from Beliefnet and our partners
previous posts