Economic sanctions on a country are a siege 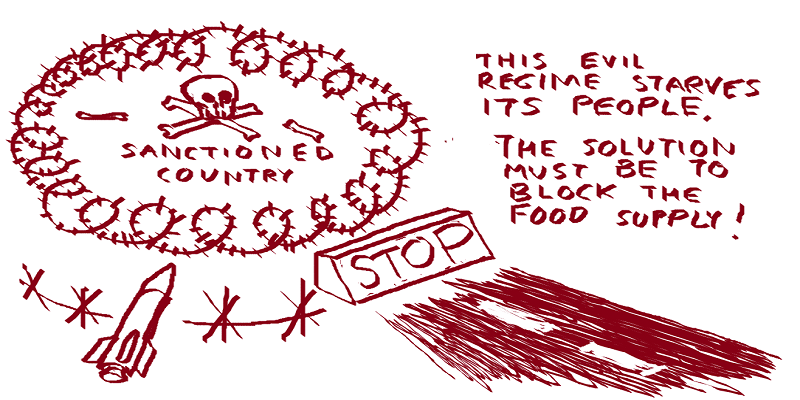 When countries are called “rogue states” or “the axis of evil”, as George W. Bush said, we as Western countries proceed to put economic sanctions on them.

But the victims are invariably the common people and not the ruling dictator we have been complaining about – whether it is Saddam Hussein then or Kim Jong Un now. As images come in of the starvation, illness and unhappiness in the country we are laying siege to with economic sanctions, journalists do something asinine. They start using the image of starvation – the starvation we created – to prove the ruling regime is evil and is failing its people.

But surely that is an unjust portrayal. Aren’t we in fact the evil ones for actually creating the starvation, by directly cutting off food and medical supplies into the country we are sanctioning? Aren’t we in fact committing genocide against a foreign people, in the course of which we do little other than undermine a foreign dictator’s public image?

US sanctions on Iraq contravened international law and may have killed a million civilians, many of them children. Should Saddam Hussein be blamed for those deaths because he existed, or should the US government take responsibility for what it directly did in order to undermine Saddam Hussein? Similarly, if claims of starvation and more extreme, cannibalism, in North Korea prove true, should Kim Jong Un be blamed, or should the countries who directly cut off the food supply with economic sanctions be blamed?

North Korea is the prime example. North Korea is the victim of a near total encirclement by states, including South Korea, that have worked to isolate North Korea from the world in order to weaken its political regime. Although this was planned and is a public strategic and military aim of the United States and its allies, North Korea’s “isolation” is presented to the world as somehow being a self-inflicted wound. North Korea’s ideology is misrepresented as being to blame for the isolation, just as Iran’s ideology was, and even China’s at one time. There was never anything isolationist about North Korea’s ideology. North Korea has always wanted to be open to the world, but it has been surrounded by an iron curtain of American warships, missiles and tanks since the end of the Korean War.

Another extension of the asinine self-fulfilling propaganda of regime “isolation” is the idea that “communist” states inherently collapse in the same pattern as the Soviet Union, because they do not encourage enough competition in proper capitalist fashion, in global markets. The result is economic stagnation and failure, we are expected to believe.

In reality, who won the Cold War had nothing to do with correctness of ideology and was merely to do with brute geopolitical competition. So-called communist countries were always absolutely capitalist when it comes to international trade, and the same is true of North Korea and Cuba today. Both North Korea and Cuba went to extreme lengths to develop covert networks of trade around the world, circumventing the economic sanctions on these countries. If they were so determined to isolate themselves and so hateful towards free markets, why did they work so hard to subvert the economic sanctions? Why did they yearn to participate in global trade markets?

The idea of sanctioned countries, “aggressors”, “communists”, “the axis of evil” etc being economically isolated and failing to provide for their people is nothing more than shallow propaganda, which references economic body counts in a type of economic siege warfare. The so-called communist countries didn’t volunteer to starve by not participating in global markets to boost their economies. They were shut out of these markets intentionally by hostile enemy countries and a hostile enemy world-economy that wanted to see them fail. It didn’t matter what their ideology was, only that it disagreed with the present historical social system and was therefore intolerable. They were going to be isolated and crushed all the same, so the socialist bloc of the Cold War met the only fate they could. They were not only divided among themselves, but they were consistently in the minority and behind in historic industrial development, right up to the point when foreign-imposed economic and social isolation resulted in their domestic political collapse.

Imagine for a moment that North Korea and Cuba weren’t the only remaining Marxist-Leninist states left in the world, but in fact the situation were inverted. All the West had become socialist states, and only North Korea and Cuba were capitalist. It would be folly to believe, encircled and surrounded by hostile regimes laying siege to them, that the world’s only two capitalist countries would have developed prosperous economies from a position of total isolation, and outshone the entire world.

The isolation and starvation of countries as a political tactic is, in almost all cases, a type of foreign aggression aimed at regime change. It is almost never the result of a regime actually not caring for its people. The guilt for the starvation, for the emaciation of the children, rests not with some dictator we don’t like, but with the countries who have deliberately and consciously applied sanctions as a political weapon to create the spectacle we are now seeing. 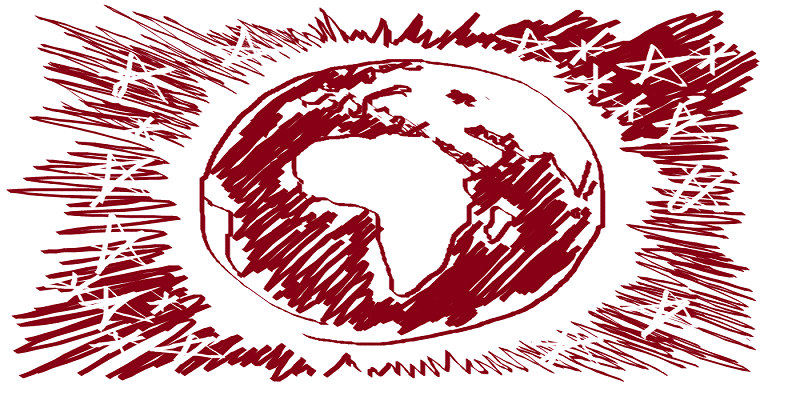 Climate change and war, Africa to Arctic
archives most recent
More from Beliefnet and our partners
previous posts