My siege is finished.

The vilification of Vladimir Putin in the media makes us blind to the good he does. 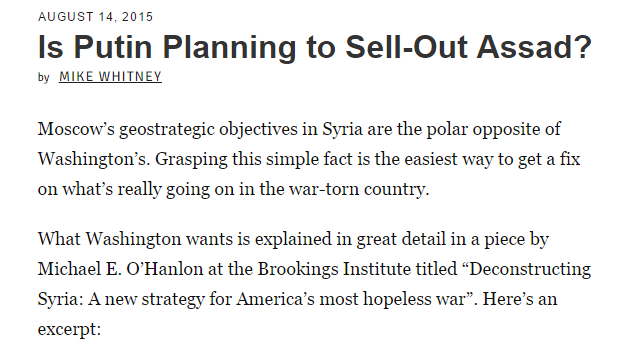 Unlike the US, which supports failed rebel groups in Syria who are killing one another, the Russian government wants a peaceful resolution of the Syrian Conflict. The hysterically anti-Russian media avoids mentioning this and instead focuses all mention of Russia on anti-Russian sanctions and Russia’s stake in the Ukrainian Civil War. A war that, unlike the US who support only weak and failed actors when interfering in conflicts around the world, Russia has the advantage in.

Due to the failure to remove Bashar al-Assad’s government from power in Syria, the US has switched its objective to trying to divide Syria up into governed and ungoverned spaces that will simply deny Assad power over at least some of his country. Whether thousands of people are beheaded by extremists in those territories does not bother the US government, which is still driven by its grudge against Assad and its desire to feel a sense of redemption for wasted billions of dollars on “rebel” groups by at least reducing Assad’s power a little.

The Russians want no division of Syria and have even more reasons to thwart whatever the Americans want, especially now that the US is in an unofficially declared “new Cold War” with Russia with the anti-Russia sanctions. The Russian government’s desire for a political resolution of the Syrian crisis, rather than America’s non-solution of dividing the country among terrorist groups and separatist enclaves at war with themselves and surrounding countries, is driven by Russia’s genuine interest in preventing the spread of terrorism to Eurasia. We are blinded to the good work done by the Russian government to end the crisis in Syria, without it even being covered in our media, because the goose-stepping alliance of television channels and governments wants only to portray Putin as a villain.

Russia helped to dismantle Assad’s chemical weapons, and was a key partner in the nuclear deal with Iran. Deeds that embarrassed the vindictive US government, which wanted to instead bomb Assad (based on scant evidence as it was with Libya and Iraq before), and was one of the core reasons for Obama’s fallout with Putin.

From an analysis authored by Mike Whitney:

Russian President Vladimir Putin takes the threat of terrorism very seriously, which is why he has been working around-the-clock to engage leaders from Saudi Arabia, Turkey, Iraq, Syria, Iran, the Kurds and Syrian opposition groups in negotiations to put an end to the fighting and reestablish security in Syria.  It’s worth noting that there’s been an effective blackout of these crucial negotiations in the western media, mainly because they make Putin look like a peacemaker who is respected among other world leaders and who is making every effort to stop the spread of terrorism. Obviously, that doesn’t jibe with the media’s portrayal of Putin as the new Hitler, so they’ve simply omitted the meetings from their coverage.

People who think Russia is a threat to international security should remember that the sole common denominator in all conflict zones that threaten international security is the involvement of the US government and its crusade for “regime change” against all backward regimes except its own. The world need not be reminded that America is led by a corrupt mafia-state that kills its own people and spies on even more, including its own so-called allies. It is the US government, in its asinine belief that it is “exceptional” and deserves ultimately to rule the world, that labors to justify war and condemn all other powers but its own. The US would have you believe that other regimes deserve to be overthrown, when in fact the only regime crying out to be overthrown today is the American police state.

The US should stop imitating the war criminal and sore loser McCain, cheering for war and blaming its victims for its atrocities, before the chickenshits come home to roost in the White House.

Do moderate Islamic politics have a future in Europe?
archives most recent
More from Beliefnet and our partners
previous posts