Intellectualism is not taught in school.

The idea that countries should welcome everyone and citizenship should be charitably extended to everyone also gives rise to the idea of “citizens of the world”. But is this idea noble, or even necessary? 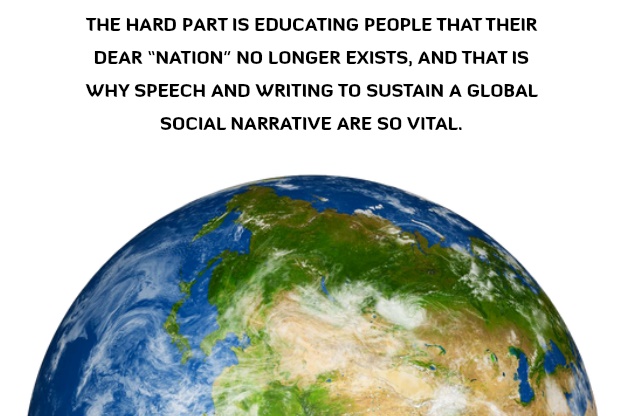 The hardest part of humanity’s change to a more humane future, as I explain at TVP Magazine in this screen capture

If applied correctly, this would be a doctrine stating that being a member of the human family is enough to give someone political rights. Not simply human rights, but an ability to participate in governance – perhaps governance of the whole world, as the term implies.

People may also call themselves citizens of the world simply because they have multiple nationalities or they do not feel attached to a single nation-state, but in their case it is only rhetoric. It is the idea of giving everyone the same global political rights that I want to address in this post.

To say national citizenship should be eschewed in favor of global citizenship, in an actual political sense, makes less sense than basically calling for the abolition of citizenship altogether. Similarly, if someone told you that everyone should be given the same amount of money, the best response would be that it makes more sense to abolish money.

Perhaps it is simply more appealing for people to believe that nothing needs to be abolished, and it only needs to be made more inclusive, but in reality, making something inclusive or more equal usually just negates the reason for its existence in the first place. If everyone had the same political rights, if everyone was considered equally a member of each nation-state, or if everyone was considered equally a member of a single global state, hypothetically, then there would be no need to categorize anyone as a citizen. Everyone would fit into the category, making it meaningless.

Citizenship as a western political idea is inimical to equality and inimical to the idea of a common human heritage. The basis of citizenship, as it was first conceived even in Ancient Greece and in many regimes since, was composed of forms of racism, bigotry and the idea that one group is more deserving than another.

It is a strange fate now that – while western governments universally preach human rights and the elimination of hate and killing – they perpetuate the institutions of the Westphalian nation-state that are responsible for all the violations of rights, all the hate, and all the killing of our time. They still speak the name of some nationality with pride, as if those who belong to it are somehow more deserving than those who don’t belong to it, and they still pledge to defend these people more than other human beings, using violence.