“A Common Heritage”: from The Venus Project to the Battle for the Net

War is the motor behind institutions and order. 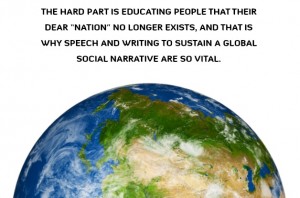 For years now, Jacque Fresco has called on us to imagine a world beyond politics, poverty and war: a superior epoch in which nations are obsolete. With nations gone, the burdens of bigotry and warmongering that were preserved and legitimized by their atrocious and morally bankrupt institutions will have been cleansed from civilization.

We already live in a world that is increasingly interconnected, where loyalties are not as rigidly and conservatively defined as they were in the past, and ideologies are as fleeting and transitory as Twitter trends. In this world, borders are fast becoming an obsolete encumbrance, and people have much greater freedom to choose their own values and sources of information without relying on authority figures and established media sources to do so.

I believe that European countries have opened the door to tolerance, and that there is no reversing this choice. Clinging to nationalistic vestiges and notions of national community, warlike allegiances, and so on, is no longer compatible with modern life and is a source of growing offense to many. People must eventually choose to abandon their “support our troops” reflexes and beliefs about national superiority, because such ideas undermine social cohesion and endanger the borderless, stateless, post-war future that has been predicted and pursued by fighters for social change now for centuries.

The Venus Project represents humanity’s noblest political aspirations, the desire for a voluntary global community who accept the world’s resources as a common heritage, accessible to all. To this end, the thesis of the Venus Project has been the elimination of money itself, and its replacement with a global Resource-Based Economy (RBE). This radical reform to the way we manage the Earth’s people and resources, Jacque Fresco teaches, is the prerequisite to world peace.

The declaration of the world’s resources as a common heritage is a battle by humanity against impersonal and hostile banks, corporations, intellectual property, and the state.

The Internet is the one existing resource that humanity already recognizes as a common heritage, and we must turn the whole world the way of the Internet. However, even the Internet – a precious and vital prototype in many ways for humanity’s future – is threatened by capricious states and fiercely monopolistic corporations clinging to the past.

Right now, the US government is preparing a new rule that would let Internet providers discriminate and charge fees. Now more than ever, folks in the US must stand up and fight for Net Neutrality. Keep your favorite sites from being slowed to a crawl by the greedy companies who lobby for privileged “fast lanes” and better services than others rather than equal access for all.

Preserve the Internet as our common heritage: call the White House now and tell Obama to save the Internet — and his legacy — by reining in the rogue Federal Communications Commission (FCC).