An Open Letter To Today’s Tweens and Teens About Bullying

Today, I write to you directly.

A few days ago I wrote a post because I was both saddened and discouraged. It was about the death of 15 year old Amanda Todd who lived in British Columbia, Canada. After enduring heartbreaking and unthinkable treatment from her peers, she chose to end her life.  (The Importance of Demonstrating and Teaching Compassion – RIP Amanda Todd.)

I understand that she made some really bad choices. Many teens do. I did. I made bad choices as a teen, the only difference, there was no internet, there were no cell phones or digital cameras and there was no facebook or twitter. Mistakes were made, I had to endure my own embarrassment of walking into school and facing my peers, but my friends remained my friends and the whole world didn’t become a part of it to weigh in and cast judgment.

What I don’t understand are the actions of not just one but many to make her life a living hell.

I think that adults oftentimes give you way to little credit and way too little responsibility.

I want to tell you what bothers me most about Amanda’s story. At every point in this story, everyone involved had moments of choice – to stand-up, to reach out a hand or to conversely jump on the ‘hate’ Amanda bandwagon and go along for the ride. In Amanda’s story, something like 50 kids got together to torment her in front of her new school. They banded together, using this unconscious ability to connect with each other and traveled to her new school just so they could continue to tear her down.

Bullying is about feeling powerful and whether you are five years old or fifteen years old or fifty years old, it is the same. It’s about making you feel better, filling the empty space within, by tearing someone else down. There is a sense of power that comes when a group gangs up on a single person, whether it’s kindergartners chanting ‘cry baby’ or it’s fifteen year olds chanting ‘slut’. But that sense of power comes at a price. It isn’t true power, it is mob power. It’s what William Golding wrote about in his book Lord of The Flies. It’s savage instinct.

So much is being said by adults about bullying today. I’m reminded of the anti-drug campaigns when I was a teen. There was one commercial that aired that said ‘this is your brain, this is your brain on drugs’ and we all made fun of it. These commercials were so hopelessly out of touch and didn’t speak to us at all. It was an adult’s way of trying to convey that drugs were bad. The commercial showed an egg being fried in a frying pan.

Every day you make choices, whether you are aware of them or not. It’s time to start to make those choices with conscious awareness.

Power is intoxicating, in any form, but the best kind of power comes when you stand up for another, when you embrace someone who has been beaten, when you take a stand and say ‘no’.

Don’t underestimate your power to create positive change, all it takes is one and then another and another to stand up and say ‘enough is enough’.

I ask you all to think about ways in which you can help put an end to, what really is, this devaluing of human life.

There is book written by Malcolm Gladwell called ‘The Tipping Point: How Little Things Can Make a Big Difference’ and it talks about that ‘magic moment when an idea, trend, or social behavior crosses a threshold, tips, and spreads like wildfire’[1].

So far, a negative Tipping Point has fueled dehumanization – whether it’s kids posting girl on girl fight videos on YouTube or it’s using social media to destroy another’s life; the speed at which these things take off and create very real life experiences is mind boggling and in too many cases life-destroying.

What kind of positive Tipping Point can you create?

I hope that in future days each of you will make the choice to empower not only yourself but those in your life, whether you know them or not.

[1] Malcolm Gladwell, The Tipping Point: How Little Things Can Make A Big Difference, 2002, Back Bay Books 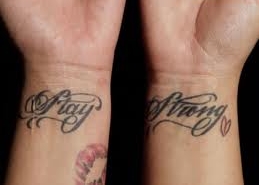