Is It Time to Put Meat Back on the Menu? 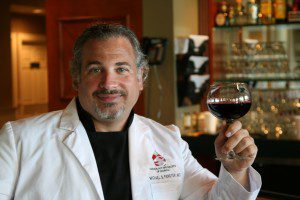 Eating meat has gotten a bad rap in the past years. Yet then we hear about its benefits. It can get very confusing. That’s why I’m thrilled to have Michael Fenster, M.D., F.A.C.C., FSCA&I, PEMBA, as my guest today. He’s a board-certified interventional cardiologist, also known as “Dr. Mike.” In his book, Eating Well, Living Better: The Grassroots Gourmet Guide to Good Health and Great Food,, he combines his culinary talents and Asian philosophy with medical expertise, creating winning recipes for healthy eating. A certified wine professional and chef, Dr. Mike worked professionally in kitchens prior to entering medical school and maintained his passion for food and wine throughout his medical career. He has participated in numerous clinical trials and spoken nationally on a variety of cardiovascular topics to audiences, including the American Heart Association and American College of Cardiology. Dr. Mike holds a JuDan (10th degree black belt) ranking in Bujinkan Budo Taijutsu.

With as much bad press as red meat has received lately, Popeye’s erstwhile companion might be contemplating trading in his trademark fare for a spinach and tofu Lean Cuisine.A spate of commentaries regarding several recent studies, recommendations and guidelines has red meat more out of favor than a kosher deli in Tehran.  But is eating red meat really the dire dietary decision it is being portrayed to be?  When it comes to who’s chewing the fat, the question is, where’s the beef?

Here is a commentary focusing on the recent American College of Cardiology/American Heart Association dietary guidelines. This expert opinion was delivered by a paid consultant for the Pritikin Longevity Center:

“An analysis of 448,568 participants in the EPIC (European Prospective Investigation into Cancer and Nutrition) trial, 26,344 of whom have died, showed what investigators termed ‘a moderate positive association’ between processed meat consumption and mortality, especially deaths from cardiovascular disease and cancer. In a multivariate analysis, daily consumption of red meat at an average of 160 g or more – that’s 5.6 oz. – was independently associated with 14% higher all-cause mortality than in individuals who consumed an average of 10-19.9g/day.”

“The association was more striking for processed meat, such as salami: Subjects who ate an average of 5.6 oz/day had 44% greater all-cause mortality. The investigators estimated that if all study participants limited their processed meat consumption to less than 20 g/day, 3.3% of deaths could be prevented.”

In any statistical analysis, once the raw data is collected, adjustments for measurement errors must be made before any meaningful and statistically valid conclusions can be drawn. Following such adjustments, the conclusions from the study were that the “elevated total mortality observed in the highest category of red meat consumption became statistically insignificant.”

In other words, eating 160 grams or more of fresh red meat daily did not cause increased mortality!
Several other statistical models were used and the researchers continue to observe “no statistically significant association.”  So eating fresh red meat at any level did not correlate with increased risk of cardiovascular disease, cancer, other disease or total mortality. That is not what was intimated in the position statement.

Conversely, the various statistical models yielded a consistent observation of “significantly higher all-cause mortality with higher consumption of processed (italics and bold mine) meat.”  It was the processed meat in this study that was consistently associated with increased disease and mortality at every level.  There was no association with increased disease or mortality when eating fresh red meat or poultry at any level.  This is a critical distinction.  These processed meats are what you find in the filling of your yoga mat sandwich.

These findings are not an isolated anomaly.  A meta-analysis done several years ago by Harvard University examined almost 1.2 million people worldwide.  That study found no association between the consumption of 4 ounces of fresh red meat daily and the development of cardiovascular disease or diabetes.  However, the consumption of just 2 ounces of processed meat each day raised the risk of developing cardiovascular disease by more than 40 percent.  It increased the risk of developing diabetes by almost 20 percent.

Saturated fat has long suffered as the putative whipping boy for all the ills attributed to the consumption of red meat.  However, a well-done meta-analysis of almost 350,000 people found “no significant evidence for concluding that dietary saturated fat is associated with an increased risk of CHD [coronary heart disease] or CVD [cardiovascular disease].”

Based on such faulty logic, the current dietary guidelines reflect a persistent and outdated view to replace all saturated fat, particularly that derived from animal sources and read meat, with polyunsaturated fats, particularly those derived from plant sources.  Another recent meta- analysis examined the data from more than 500,000 participants examining just such dietary recommendations.  Their finding: “Current evidence does not clearly support cardiovascular guidelines that encourage high consumption of polyunsaturated fatty acids and low consumption of total saturated fats.”

What is clear is that we need to get beyond simply trying to quantify the value of our food in terms of calories, carbohydrates, fats or saturated fats.  We need to integrate the quality of the food we eat into our value assessment. What we add, what we remove, how we produce and how we process our food are emerging as critical determinants as to whether what we eat nurtures us or curses us.  We should put as much thought into the food we place in our mouth as the cell phones we choose to put in our pockets.
************

Law of Attraction in Action: Focusing on a Solution
archives most recent
More from Beliefnet and our partners
previous posts