Law of Attraction in Action: Commitment

This is post 80 in my series on the Law of Attraction in Action. You CAN use your power to attract all that you need. I do it every day! Read the posts in this series to see how.

I’ve encountered many people who I consider bouncers. Every time they speak they’re on to a new project or interest. The one from the time before has been put aside for the newest goal. The trouble is, they often don’t achieve many goals because they jump from one to another without giving any one the proper time and attention to reach them. I used to be a bouncer. I’d get an idea and get very excited. Then I’d tentatively make mental plans to get them done. It was fun until I had to actually do the work. Then things would come up and I’d jump to a new idea and leave the others behind undone.

Bouncing from one idea to another without committing to finishing one is just another version of dreaming. You’ve gotta get out of bed to wake up and commit to the work.

It’s so easy to dream, talk about it and imagine how happy you’ll be with the results. I used to love doing that until the reality hit that I wasn’t making progress because I didn’t dig in and focus on making it happen. The fun can be more in the visualizing an idea and thinking about its rewards. Committing to accomplish it can be the part you try to avoid because it seems too hard. Making phone calls can seem unpleasant, asking can seem scary, staying on top of people can seem tedious. The Universe picks up on this and returns those things.

When it’s not fun anymore, many people move on to the next dream. Then they wonder why nothing ever manifests for them.

A lack of commitment to what you want tells the Universe you’re not serious about getting it. You’d be serious about a wish fairy putting it into your lap. But you’re not willing to do whatever it takes to commit to see something you say you want through. Talking about the good points of it happening helps create the necessary emotion. But commitment is another necessary component to manifesting.

If your actions demonstrate that your commitment to a goal isn’t strong, it’s harder to attract what you want.

I began to write books many years before I was published. At one time I was writing at least 8 different books. I’d work on one for a while, then jump to another. Getting an agent seemed scary. Actually, the real scary part was having my ability as a writer judged. My confidence wasn’t strong like it is now. Since I love writing, it was fun to work on my books. For years I ignored the endgame—getting published—and almost played at being an author. I jumped between all the books until I had to make a big decision.

I finally committed to choose one book to focus on developing enough to get a deal for it. It actually was much easier than I’d imagined when I avoided it. After I got my first book deal, it was easier to do more. Fear can magnify the potential negatives of the process. If you bounce from project to project or goal to goal without bringing any to fruition, ask yourself why. I mean really ask. I was scared that my writing would be rejected. I finally accepted that if I didn’t submit it, I was rejecting it. So I could only get something better if I tried to get a deal!

Pick ONE goal and commit to doing each step to reach it. Force yourself to get past self-inflicted roadblocks created by fears or lack of confidence.

Fears are overcome by doing. Confidence is built by doing. The Law of Attraction responds best when you’re doing the work. It doesn’t matter how many teensy steps are needed to do it. You can do it with a strong commitment and faith that it will attract what’s needed. A lack of commitment foils that kind of attraction.

Les Brown said, “You need to make a commitment, and once you make it, then life will give you some answers.”

If you know what you want, commit to doing things to make it happen. Begin by putting it out to the Universe in your thoughts and then doing whatever work is necessary to make it happen. Your thoughts and actions should demonstrate you’re committed to manifesting what you want. The more commitment you show, the more support you attract. Then you’ll stop bouncing between goals as you reach one at a time, which will motivate you to do a lot more!

See all the Law of Attraction in Action Series.. 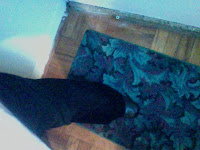 Kindness vs. DoorMat
archives most recent
More from Beliefnet and our partners
previous posts