Can You Really Live by the Grace of Passion? 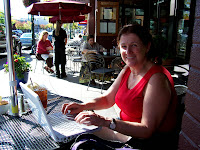 Can You Really Live by the Grace of Passion?

Absolutely YES! I read a post last week at Tom Volkar’s blog, Delightful Work, called Work as Play? It opened with the question, “Have you yet found work that is so delightful that you’d do it for free?” Like me, Tom is his own boss. Also like me, he loves and values the total freedom of self-determination. Then he confessed that there’s nothing he currently does that he’d do for free. But being your own boss is definitely a blessing in itself. It can allow for passions in other areas.

I commented that I’m someone who found her passion and only do what I love.

I rarely meet people who feel the way about their work as I do about mine and know how hard it is to be in this place of satisfaction. A majority of people just work for the money. I heard two guys chatting while we all waited on line in the bank. When asked how he was, the first said, “you know, eating, sleeping and working—the great American dream—hal ha!” The other nodded in agreement.

And here I thought the great American dream was to have opportunities. I’m taking advantage of my version! After being a DoorMat with no self-determination, I’m determined to hold onto my power—because I CAN!

These guys discussed how anxiously they looked forward to being able to take retirement. They weren’t much over 40 years old and they were looking forward to retiring so they wouldn’t have to work anymore! Ah… that was the pinnacle of joy in their eyes. I felt sad for them that they didn’t seem to have things to look forward to tomorrow. So many people are in routines that they call life. But that isn’t living—it’s passing time.

Even if someone left me a huge trust fund, I’d never stop writing. Never! I can’t imagine not writing.

When I was a Doormat, I did everything that was expected of me. It felt more like being in a comatose state than like living—getting through today so I could get to tomorrow. Yet tomorrow I’d do the same thing. I became a teacher because I was told that’s what I should do. It developed into another routine as I stifled my need for passionate outlets. After leaving my husband, I continued teaching for a while, as I was prepared for nothing else. It was a time of soul searching.

Then I discovered the power of having faith. As someone who was always a non-believer, feeling a strong spiritual support blew me away. And impelled me to follow my heart.

I didn’t want to spend the rest of my life in pursuit of ways to avoid living. When I finally decided to wake up, I was beyond the point of being scared. Still, I didn’t just glide from point A—unhappily teaching—to points B-Z and beyond—having a career that feels like a blessing each day. As Tom said, creating a life of self-determination isn’t easy. I didn’t just become a successful author. I built up to it.

Preparation and desire can help you find a path to satisfaction from how you make a living. Many authors have day jobs, so leaving mine was sort of scary. I say sort of, since I took steps before I cut off my other sources of income. I didn’t quit a job since I’ve actually never had a permanent one. For years I’ve been commitment phobic about my time. I have no problem committing with the right guy.

But my time—that’s the most valuable commodity in my eyes.

After many years of living in DoorMatville, my time became precious. I was tired of feeling committed to doing whatever others wanted. It was time to live and breathe on my own terms, so I didn’t want obligations—unless they were ones I truly desired—to limit what I could do. I was teaching, but as a substitute once I got divorced. While I earned less in money and benefits, I gained more in freedom. When the opportunity arose to travel, I could just say I wasn’t available to work for two weeks, and off I’d go. I love being free to do what I want, when I want, how I want.

Subbing was easy. I could have worked every day if I chose to. But one day, after thinking about how much I didn’t want to continue to do it, I realized I was ready to make the leap. At the end of the school year, I’d get a renewal form to fill out to teach the following year. It was a simple page that I just had to sign, put it in the envelope they sent, and mail. So easy. And, so easy to continue in my rut.

I decided I was ready to be happy! To rock and roll with life! So I burned the renewal and never looked back.

Working for yourself can be tough, and I admire that Tom has been able to do that. I’d never written anything for money and was just beginning to teach some workshops on the music industry and self-empowerment. There was no clear vision of how I’d earn a living. But by that time, my faith was VERY strong and I was living according to the law of attraction. I knew I had to make room in my life. I could have renewed the license, put it in a draw and just not teach. But, that showed doubt, and I don’t doubt God’s support! I knew when I showed I’m ready for it, the guide would come. My circumstance just worked out after that.

Once my safety net was cut, opportunities opened. Even in quiet financial times, I keep the faith. I’m on a happy path and don’t ever want to get off it. If you choose to make changes, do it slowly. Take the time to explore your options. Decide what’s most important to you. Next week I’ll post some specific tips for getting out of a work rut. For now, think about how happy you are—or aren’t. Then decide what it’s worth to look forward to work instead of looking forward to it being over.

In his blog Tom also asked, “Could the most delightful work possibly be the freedom to not work at all?”

I don’t think that would work for most people. There are many stories about people who win the lottery, quit work, and blow the money because it doesn’t make them happy. It’s important to have fulfilling work to live in order to live with satisfaction and contentment. My plan for when I win the lottery ? is to invest some for a guaranteed income to pay my bills and use the rest to help others. I’d continue to write, speak, and counsel people, without having to get paid. Even if I became a gazillionaire, there’s no way I’d stop doing what I do now!

I know I’m a very blessed chick! My passion for writing is so strong that I couldn’t live without it.