“You Can’t Just Sit There” 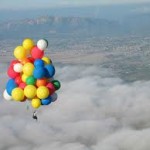 Larry Walters was a thirty-three-year-old truck driver living inLong Beach,California. On a warm July morning he visited his local army surplus store and purchased for himself 42 huge weather balloons.

With the help of some friends, he filled those balloons with helium and attached them to an aluminum lawn chair. He then grabbed a peanut butter and jelly sandwich, a six pack of beer, and a pellet gun (to pop the balloons when he was ready to land), took his seat and cut the ropes holding him to earth.

Like punching the top button inside an elevator, he immediately soared three miles into the atmosphere. Walters’ lawn chair strayed into the path of a TWA and Delta commercial airliner – scaring the pilots of those planes nearly to death – and finally ended when in near hypothermia, Walters began shooting the balloons with his pellet gun.

The authorities were there on the ground to meet him, but they didn’t know exactly what to charge him with. He was not arrested, but ultimately, the Federal Aviation Administration fined him nearly $4,000 for the stunt.

The FAA stated that they would have also suspended his pilot’s license; if, of course, he had one. Larry Walters responded that “if the FAA had been around when the Wright brothers were testing their aircraft, they would never have able to get off the ground.”

Now the obvious question: Why would someone do such a thing? Well, besides saying it was the most fun he ever had, Walters is reported to have explained his exploits like this: “I’ve had this dream for twenty years of going up into the clear blue sky. You can’t just sit there. You’ve got to do something.”

But Walters was quick to confess, that while he does not regret what he did, he probably wouldn’t do it again. It was more than he bargained for.

As we seek to follow Christ, it’s not unusual to find ourselves in a Larry Walters’ position. We have this almost instinctive draw to launch out into the blue, to reach for higher and better things, or to go deeper in our connection with God. We want more.

But what keeps our feet glued to the ground is the fear of cutting the moorings that hold us to the ground. We are more afraid of the unknown, than we are dissatisfied with what we know.

I wonder if our spiritual journey looks anything like what I saw one afternoon at a local water park. There was a kid, well past the toddler age, who caught my attention. He was almost as tall as I am, and he was playing in the kiddy pool.

Sometimes he would venture into the ankle deep water of the wave pool, but no further. He was either incredible afraid of water, something I can appreciate, or he had the most overprotective mother on the planet, something I am familiar with as well.

He had a life jacket on (US Coast Guard approved, no doubt). He had smuggled in a pair of goggles and a snorkel. There was a whistle around his neck. I watched him for a long time, and every time I passed the wave pool area he would be there, thrashing about in the shallows or sitting in the shade of an umbrella.

I wanted to go up to him and say, “You’re in the kiddy pool, dude. Come ride the rapids. Come shoot the tubes with us. Launch out into the deep water. You’re dressed for it. Come on, let’s have some fun!”

Jesus extends the same invitation to us: Do you want to see something extraordinary? Do you want to experience a depth of faith and spirituality that you have never known before? Do you want to fly into the deep blue, leaving behind the mediocrity you have lived in for years?

Then quit clinging to the side. Quit building sandcastles next to the shallows. Quit wallowing around in the kiddy pool, pining over what you wish could be. Let go. You are already dressed for it. It might scare the stuffing out of you, but you will never want to go back.