My Life to Live Over 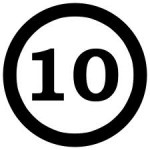 My kids are always after me to play a game with them: Monopoly, Uno, Deal or No Deal, and lately even Blackjack. That’s right. The preacher’s kids play Blackjack. I figure they’ll need those skills somewhere in the future.

So in the spirit of my game-playing children, please play a game with me. You can play along right where you sit reading this paper. It’s a brainteaser called the “Game of Tens.” Get your pencil and note pad ready, and answer the following questions:

Name the ten wealthiest people in the world.

Name the last ten winners of the Nobel Peace Prize.

Name the last ten winners of Time magazine’s “Person of the Year.”

Name the current ten companies at the top of the Fortune 500.

So, how did you do? That bad, eh? But just in case someone answered them all without the assistance of Google, e-mail me. I’d like to congratulate you. For the rest of us, however, try this second set of questions. I’m sure you’ll do a little better:

Name the ten most memorable experiences of your life.

Name ten people whom you love.

Name ten people who have an influence on your life.

Name ten places you have visited that you will never forget.

Name ten holidays or celebrations you have recorded in a photo album, on video, or on film.

The “Game of Tens” has been around for years. Of course it has come in varied forms and with different names, but the crux of the thing has always been the same. Huge, world-shattering events are laid alongside the common and familiar.

The lesson this game teaches, regardless of its variation, is always the same and always quite simple. The things that we think are so eternally important, many times, turn out to be nothing but dust. We don’t remember them at all.

And the things so common, so close to us we can no longer see them; those things so routine and ordinary, these turn out to be the most important things in our life.

No, the events that have most shaped us aren’t found on the front page of the newspaper or recorded in the Guinness Book of World Records, but these events and people are recorded in our hearts. That makes all the difference.

While his words have been adapted and often attributed to others, Don Herold wrote in the October 1953 edition of Reader’s Digest, a piece entitled, “If I Had My Life to Live Over.” He was in his mid-sixties at the time and had lived long enough to learn a few things.

What he learned need not be lost on us. He wrote:

“If I had my life to live over, I would try to make more mistakes. I would relax. I would be sillier than I have been this trip. I know of very few things that I would take seriously. I would be less hygienic.

I would go more places. I would climb more mountains and swim more rivers. I would eat more ice cream and fewer beans. I would have more actual troubles and fewer imaginary ones.

You see, I have been one of those people who live sensibly and sanely, hour after hour, day after day. Oh, I have had my moments. But if I had it to do over again, I would have more of them – a lot more. I never go anywhere without a thermometer, a hot water bottle, a raincoat and a parachute. If I had it to do over, I would travel lighter.

If I had my life to live over, I would pay less attention to people. I would seek out more teachers who inspire relaxation and fun. I had a few of them, fortunately, and I figure it was they who kept me from going entirely to the dogs.

I would start barefooted a little earlier in the spring and stay that way a little later in the fall. I would play hooky more. I would shoot more paper wads. I would have more dogs. I would keep later hours.