“From Jesus to Jesus” 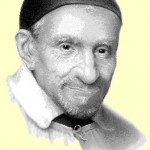 Sometimes, rather than being the one behind the pulpit, I get a chance  to listen to someone else wax eloquently about God, life, grace and faith. Not long ago, anticipating a treat, I sat in on a talk by a prominent Christian speaker. This gentleman leads two different Christian organizations. He has worked in church planting. He is an author. I was sitting in the meeting, hanging on his every word and jotting down notes.

So I didn’t miss it when he said: “I have learned that if you provide someone with an education and a job, they will want your religion – your Jesus. It’s the most effective evangelism possible.”

When I heard those words I put down my pen. I wanted to leave the room but couldn’t get to the door. What was it that bothered me so? Those words are Machiavellian to the deep, dark core. So long as the end is noble, the speaker more than implied, the means are then inconsequential.

But this is not the true gospel. Jesus did not meet needs, feed the hungry, or heal the sick because he had some hidden agenda to get people into his club. No, he did these things simply out of compassion for the afflicted.

Are we being honest with our would-be converts if our final goal is to see their conversion without telling them that? And further – and more importantly – are we actually following the serving example of Christ if we are using service as a means rather than the end.

Don’t misunderstand me. As a follower of Jesus I would like nothing more than for others to become fully devoted followers of him as well. But I do not believe that, like selling a questionable product, we should stoop to contrivance to do so.

In the shadow-laden mold of the church basement, I imagine little evangelistic teams coming together. They huddle, commando style around their maps, hold hands, and say their prayers. Locked and loaded they launch covert attacks on the soup kitchens and homeless shelters.

They arrive with good food, warm blankets, and plenty of gospel tracts. But their primary objective is not to relieve suffering. No, it is to add a few names to the roll; to gain a few more converts. It is to convince the poor of their need to sign a membership card.

It is wrong to trick, fool, manipulate or coerce people into a spiritual decision. It is a sin to take advantage of the poor. It is reprehensible to use empty stomachs or empty wallets against their owners. God deliver us from such explicitly sleazy motivations and methods!

We are called to serve others not so much to make them followers of Jesus, though that may happen. We are called to service because service really is what Jesus did. And because, quite literally, it is in serving others that we actually see and find Jesus.

Jesus’ words from Matthew 25 are inescapable. Jesus said, “I came to you hungry and thirsty and naked and in prison.” And when his hearers are confronted with this, they respond, “But Lord, when did we see you in these conditions?”

Jesus counters: “As you served the least of one of these – my brothers – you served me.” To serve others is not just to imitate Jesus, it is to serve Jesus. It is to see the face of Christ in the marginalized and underprivileged.

Saint Vincent de Paul, the great Catholic advocate for the poor, was once praying before the Eucharist when he was told of a poor beggar on the street outside the church who needed help. Vincent, upon finishing his prayer, responded, “Then I am going from Jesus to Jesus,” so literal was his understanding of finding Jesus in the least of these. I hope we will find Christ in those same faces.

Is There Any Hope?
archives most recent
More from Beliefnet and our partners
previous posts