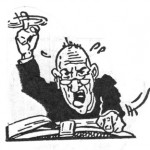 I grew up with a lot of religious rules. To violate these rules was to subject oneself to the violence of God. You may be familiar with these rules. No drinking, no smoking, no dancing, no mixed-bathing (a prospect that always intrigued my teenage mind), no Sabbath-breaking (though we did not actually gather on the Sabbath), and absolutely no questioning of religious authority.

Religious authority was bound up in “the preacher.” The big Baptist and Methodist churches downtown had a pastor. The Presbyterians had an elder. The one fledgling Catholic parish on the edge of town had a priest. I didn’t meet a Jew until high school, so I didn’t even know what a rabbi was; but in my little ecclesiastical world, we had a preacher. He was the combined concoction of teacher, prophet, taskmaster, guardian, and enforcer. I’m certain he cut his grass in a three piece suit, didn’t know a single curse word, and all his children were probably adopted because to have sex with his wife was certainly too worldly, too carnal to consider.

See, the world in which the preacher lived was black and white with no shades of gray, no mystery, no ambiguities. There were only hard and fast rules. You were in or you were out.  If you wanted to know which you were, just ask him.  He would tell you, and he used the pulpit to do exactly that. On Sundays he became an inferno of Puritan proportions. Animated, wringing with sweat, almost always discarding his suit coat and loosening his tie, he implored and coerced us sinners down the isle to the mourner’s bench. It usually worked.

Someone “repented” most every service, even if it took thirty verses of “Just As I Am” to force the issue. I remember those altar calls as being more than lengthy. They were nerve rattling wars of attrition. Sometimes I felt compelled to go forward just so the whole thing would end.

It was this preacher who arrived at a Children’s Hospital on Saturday afternoon. My younger brother had been hospitalized with a faulty heart valve and a growing laundry list of complications. He had not yet celebrated his first birthday but already he had had his chest cracked open like a melon, his kidneys had failed, his lungs had collapsed, and a Staph infection in his right elbow had resulted in the amputation of his arm almost at the shoulder to save his life; a life that hung by a thread.

My parents certainly needed emotional and spiritual support, a pastoral presence. The preacher arrived on cue. But he was anything but comforting. I was at the hospital the day he visited and within ear shot when I heard the preacher say the most horrible words to my parents. In paraphrase he said, “Surely you have committed some terrible sin for God to visit this kind of judgment on you and your family.” Even as an eight-year-old, I was flabbergasted. To this day those words still burn my ears.

Is this the God of Christianity? Is this the kind of God behind our faith? Is this vindictive deity even worthy of our worship? I think not. While this might be the god of the preacher, it is not the God revealed to us in the person of Jesus the Christ. For in Christ we find truth and grace, not this kind of crass judgmentalism. Jesus doesn’t walk into hospital rooms, his fat belly pushing against the buttons of his tailored pen stripes, handing out indictments of guilt to the innocent.

No, this Jesus sits down and weeps with the suffering. He opens his arms to the brutalized and confused. And while he doesn’t always, if ever, provide us with the answers we long for, he walks with us in the mystery of life and death. I never accepted those words spoken in that ICU waiting room. Maybe I’ve spent the last thirty years trying to disprove them. I hope you won’t accept them either. The love of Christ always trumps the hardness of men’s hearts. And for that, I say thanks to be to God.

Does Worship "Work?" Only If You Get Out.
archives most recent
More from Beliefnet and our partners
previous posts