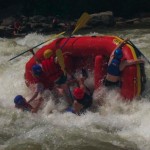 When I was a bit younger and a bit braver, a group of friends and I shot the rapids on the Ocoee River in southeast Tennessee. The Ocoee, which I think is the Cherokee word for “terrified rafter” is a world class whitewater adventure. It was the site of the 1996 whitewater Olympic events. Now, I’m no Olympic athlete, and that became evident on the river that day. I so feared being sucked out of the boat that I literally dug my toenails into the rubber boat I was paddling.

It was so petrifying that we shot the river twice in the same day. By the time we finished, I was on a first name basis with rapids named Broken Nose, Table Saw, and Diamond Splitter. If you’re up for a bit of excitement, it’s a recommended trip. Whitewater sports began quite accidentally on this mighty river. The Ocoee is dammed in three different places to produce electricity. The Tennessee Valley Authority (TVA) has operated these dams for years.

For the longest, TVA’s production of electricity killed the river. Only a trickle of water, no more than ankle deep in places, flowed through the gorge. But in the late 1970s a portion of one of their dams broke, sending the full force of the Ocoee through the canyon for the first time in fifty years. Whitewater outfitters and kayakers jumped all over the opportunity. Even after the dam was repaired, legislation was passed to protect the recreation that had developed on the river. So, for 112 days a year the Ocoee River is “turned on” for kayaking and whitewater enthusiasts. The rest of the year the Ocoee produces electricity.

On the morning I arrived at the river there was nothing but rocks. “How are we going to shoot the rapids when I can rock-jump across the river and never get wet?” I asked my guide. Speaking like a cross between Yoda and some drug-empowered oracle he said, “Sweat it not, dude. The water is coming.” He was right. The water was coming. Thirty miles upstream, in the Georgia Mountains, the water had been released. It took a little while to get there, but I watched as the babbling stream turned into the roiling Ocoee River.

The power of those rapids was incredible. You didn’t dictate to the river what you were going to do with your little paddle and rubber dinghy. There was no control over the water. That was an illusion – regardless of what some peep-eyed guide might tell you. You went where the water pushed you. Sure, at times you could steer, paddle or even stop, hiding behind a huge rock; but when released over the rapids all you could do was scream, flay at the water and pray. The power of the water had been unleashed, and we were just along for the ride.

Living out the life of faith is a lot like whitewater rafting. We have our boat and paddle. We are in this boat with our friends on the same journey. What began as a dribble is now an unstoppable flood. We are paddling along best we can, moved by the unleashed Spirit of God. And sometimes we are more than moved. Sometimes life and faith are not placid escapades of reflection and peace. Instead, the journey of faith becomes a bone-jarring exercise in survival, crashing over the rocks and through the rapids, threatening to drown us.

We are often jostled from the security of our raft, forced to scream out of desperation for a rope or lifeline of rescue. We struggle and fight just to keep our noses above the water line. We may get the relieved opportunity to list in quiet pools, catching our breath and resting our muscles from time to time. But then, the water will pick up and we are on our way again.

Sure, there are things we can and should do along the way: Pray, hang on, watch out for our friends, and paddle like hell. But ultimately we are riding the wave of God as he does his good will and purpose. His power has been turned on in our lives, and all we have to do is let it take us where it will. All we have to do is hang on. What a great adventure it is.