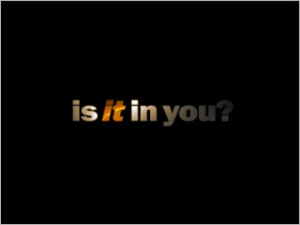 Gatorade is the most researched sports drink in the world and has spawned an entire market of look-a-likes and wannabes in the last forty years.  Gatorade has hydrated millions of amateur and professional athletes in more than eighty countries. One of their marketing pitches is as genius as their product. An athlete is exerting herself, sweating profusely. She runs, lifts weights, kicks a soccer ball, or swings a bat. Huge drops of Gatorade-colored perspiration hang off her skin, and the question is asked: “Is it in you?” The implication is clear. You cannot compete, much less succeed, unless you have the right stuff in you. Of course the right stuff is their product.

Jesus rarely spoke systematically. Rather, he chose to use stories and word pictures. He used the veiled and elusive language of metaphor. He took common, everyday happenings and crafted a message for the masses. I wonder if he were here today, would he use the most recent Gatorade commercials in a parable? Would he ask you and me the same question: “Is it in you?” He came terribly close to asking that question in his own day. In the book of Luke, Jesus was asked, “When will the kingdom of God come?” Jesus’ response is the Gospel According to Gatorade. He answered, “The kingdom of God is within you.”

The word “kingdom” is a bit archaic. We don’t use it too much. We have replaced it with words like nation, country, or state. There are few kingdoms left in the world. But the word retains its meaning. The kingdom of God is his territory. It is where he reigns. God is building a nation, a country, a rule. Where ever he has subjects, where ever his people are – there is the kingdom of God. As it expands and grows, God delivers and liberates the victimized, the oppressed, the poor, and the marginalized. God’s kingdom is a very real thing.

When will this kingdom come? When will God extend his rule over all the earth? Jesus’ answer is clear: God’s kingdom is not about what is coming – out there somewhere in some world-ending vision – God’s kingdom has arrived in the hearts and minds of people today. Why do we Christians sit in the cramped, backrooms of our churches reading the theological tea leaves, hopelessly trying to figure out what is next on God’s apocalyptic calendar? Wouldn’t our time and neighbors be better served, if we labored to advance God’s revolution of grace, rather than living like the world has already died?

Returning to the symbolic speech of Jesus, he often compared the expansion of the kingdom of God as something secret, growing to fulfillment, beneath the surface. He said it was like a mustard seed – small, inconsequential at first, yet it grows into a great tree. He said the kingdom is like a farmer who plants his seeds. Only time will show the results. He said the kingdom is like a small amount of yeast, mixed into a bowl of flour. In time, it overtakes the entire batch of dough.

When you wipe the tears off the cheek of a child, the kingdom comes. When you feed the hungry in the name of Christ, the kingdom comes. When you offer shelter to a battered woman, the seeds are planted. When you lighten the load of your neighbor, the yeast mixes into the dough. When you stand up against injustice and right a wrong, God’s nation expands. When you point a person out of poverty and shame, you are quietly advancing the reign of God. It is in the small, insignificant actions you may not think twice amount, and truly, no one else may take notice of, that God does his best work. It is in you, and through you that we find the kingdom of God.