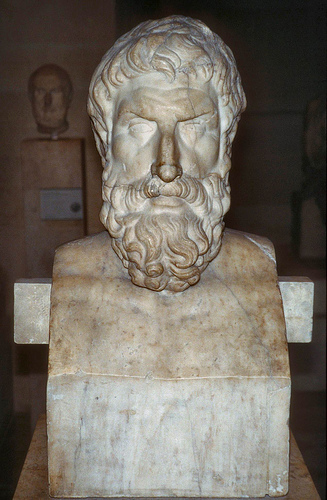 Anyway, you want proof?
Not much survives of Epicurus’s own voluminous writings. Instead, his philosophy was popularized by the 1st-century BCE Epicurean poet Lucretius, a Roman, who wrote the epic poem On the Nature of Things. Lucretius advised men, “Ejaculate the liquid collected in the body and do not retain it.” In his book Moral Darwinism, Benjamin Wiker explains that under the Epicurean way of thinking, since there’s no design in nature, there is no normative way of using and/or taking pleasure through the human body. There is nothing naturally “right” about linking sexuality with procreation. In the search for tranquility, Epicureanism sees sex as something to be avoided. Relationships expose us to the risk of pain. Rather, “it is fitting to flee images [of the beloved] and drive away fearfully from oneself the foods of love, and turn the mind elsewhere.” At which point, relieve yourself in a solitary fashion.
Lucretius is better known for articulating a startlingly detailed proto-Darwininian idea of life’s development through random variation and natural selection.
Incidentally, last night I remembered that when I was in college I actually had the opportunity to visit Epicurus’s birthplace, the island of Samos off the Turkish coast, a quick boat ride from Ephesus with its impressive ruins. I was recalling the first night I spent there. Unable to find a hotel with an unavailable room, I slept sitting up in a hut on the beach. The next night, one hotel took pity on me and put me in a room sleeping in the same bed (!) as a young woman about my age from Belgium. We had dinner that night and she told me about her father who was a Belgian politician who sparked controversy by being a Freemason. Strange, right?
After a somewhat awkward night, I woke early the next morning to visit Ephesus. When I got back to the hotel at the end of the day, I saw that either she or someone else had looted some items from my backpack. That’s my memory of Samos.
Of course this sheds no light on Epicurus.

read next post
A "Heretic" in Jewish Terms? Someone Who Denies Intelligent Design
archives most recent
More from Beliefnet and our partners
previous posts