Oh the Tangled Webs We Must Unweave 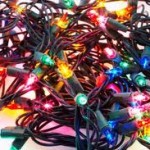 Here I am, twisted up in the same desperate situation again this year. It’s not my fault – I swear it’s not. Anticipating this jumbled mess, and having been stuck in it many times before, I planned carefully to avoid it. A year ago I employed a deliberate strategy to prevent this very disaster, and I put in painstaking efforts to manage my risk. But now I see that my preemptive planning was an obvious failure. Forces beyond my control have conspired against me to deceive and weave a tangled web. My dilemma? The annual hanging of the Christmas lights.

When I put these lights away in the attic last January they were in perfect arranged order. I had rolled and packed them so carefully, I just knew the strings of blinking colors would burst from their boxes unfettered. Instead, every strand – every single strand I tell you – looks like a giant bird’s nest.

How did this happen? Do the electrical cords naturally convulse like this? Is this how Santa’s elves keep themselves busy in the summer months – sneaking into our attics, basements, and storage units to twist and kink our well-organized Christmas decorations? Bah, humbug to it all, I say.

I doubt that Joseph had any holiday lights to string up on the first Christmas, but he had to feel like a big tangled mess had just landed in his lap. One day everything made sense. The next day nothing did. One moment he had a well-conceived plan. The next moment he had a mess on his hands. In January his life was in order, boxed nicely for the future. In December, that same life had devolved into chaos.

What did Joseph do with this tangled web? He went to work untangling every twisted strand of it. He took on the responsibility that had found him. Buoyed by his faith, he believed this child birthed by Mary was the miraculous, chosen One of God – the Messiah. Joseph chose to play the role of father to a child that was not his. He bore the scandalous stares and the hushed small-town gossip about his wife and his adopted son. He kept driving nails, kept building furniture, and kept doing what carpenters do, unraveling each stubborn strand as he went.

I’m sure there were a few knots that never came undone for Joseph. Like: How can God take the form of a helpless, human baby? Why did God choose Mary to bring this child into the world? Why did God pick him to be the child’s surrogate father? There were no answers to such questions; at least no easy answers.

And for us, there are often not enough answers to go around either, just twisting questions and more impossible knots. What do we do? We sit down on the floor with whatever life, God, Providence, or destiny has dealt to us and we untangle as much as we can. We live. We take on the responsibility that has found us. We keep doing whatever it is we do; we stay after it. And why? Because if we are going to live life, it will mean persisting through the confusion; there’s no other choice.

So when your well-ordered, well-kept life explodes into a tangled mess – and it will – what are you going to do? You can point fingers, blame others, curse the Fates, ask a million unanswerable questions, or you can get on with untangling things as you go. 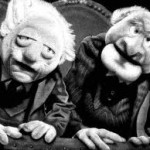 Muppets...and Hope
archives most recent
More from Beliefnet and our partners
previous posts