Some Fears Aren’t All They Are Cracked Up To Be 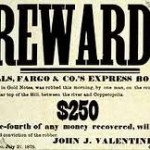 In August of 1871 a man sent a letter to his wife claiming that he had been swindled by employees of the Wells Fargo Company and vowed to pay them back. So, he began robbing their stage coaches in northernCalifornia. Over the next decade he succeeded in almost thirty robberies. He would wait for the coach at a narrow pass, and at just the right moment would emerge dressed in black with a hood over his head and a long, double barrel shotgun. He was never seen riding a horse – he just materialized out of nowhere. To match his appearance, he had a deep baritone voice. He would point his gun at the driver and kindly say, “Will you please throw down your treasure box, Sir?” This terrifying, gentleman bandit was knick-named “Black Bart.”

As you can imagine, Wells Fargo didn’t like Black Bart one bit. They hired detectives to hunt him down. Laboriously these detectives tracked Black Bart to an extravagant apartment inSan Francisco. But when they arrived they couldn’t believe what they found beneath the dark, menacing hood. Alias Black Bart was actually a man named Charles Boles. He was not seven feet tall like some of the witnesses had claimed. He wasn’t even six feet tall. He was not young and rugged, but instead nearing his sixtieth birthday. He wasn’t a bloodthirsty bandit at all. He was a handsome well-educated man who had once made a living as a druggist and transportation clerk, occupations that didn’t pay as well as he would have liked.

And since Charles Boles liked to live the high life, stay in fine hotels, eat in the best restaurants and wear the finest clothes, he discovered stagecoach robbing was not only good revenge, but helped support his lavish lifestyle. Further, he did not appear on horseback at his robberies because he was afraid of the animals, and always took a buddy to the scene of the crime. And Bart never fired a single shot or hurt the first person in his robberies because he never loaded his gun. Black Bart used the most crippling weapon in his arsenal: Fear. And he made a good living at it. But when unmasked, he was nothing people said he was. He was just a deep voice in the dark, an empty suit.

The world around us is dangerous. I know that. But the living Christ has shown this world for what it is: Powerless against those who are in him. This doesn’t mean the world will not hurt us. It does not mean some of the things we fear won’t take place. It simply means that nothing in this world can finally or completely destroy us. Imagine that your life is a chess match or a football game if you like. There comes a point in any such game where the decisive move is made. In chess, maybe the rook takes the queen; or in football that pivotal first down is made in the last five minutes. These are turning points, where yes, the game continues but it might as well be over. The final outcome has been determined. The decisive move in this game of God’s universe came at the cross and resurrection of Jesus.

The final outcome, at that moment was determined. Yes, life goes on. We struggle. We suffer loss. Pieces still move on the table. There is still time on the clock. We wrestle with our phobias and try to keep our fears at bay. But we have hope – not fantasies that the world isn’t the way it is – but assurance that Christ has overcome the world. In these perilous times we do not have to lose our heads or our confidence. The power we have been given and the love we have been shown flows from the Providence who is larger than our fears, and when we live in Him, nothing can shake us. 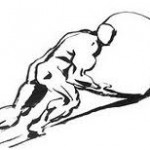