Love in a Grocery Bag 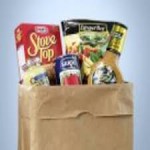 When I was a child my family lived hand to mouth. We were loved and we were cared for, but the cupboards were often bare. We ate a lot of Hamburger Helper in those days, with only the Helper. My dad’s full-time job at the time was at a textile mill, and two of his co-workers helped us out from time to time. One of them was an old Baptist preacher named Gene Clark. Gene worked the mill during the week and preached on the weekend to a congregation of less than a hundred people way out in the country. Most every Friday during the hardest years he would slip my dad a wad of cash and say, “The church has plenty of money. You need this more than they do.” And, honestly, we did.

Another man was Bobby Gentry. One Saturday morning Bobby pulled up in the driveway of our home. He got out of the car dressed in a way I had never seen him before. Rather than work clothes, he had on a suit. Three other men from his church dressed in suits got out of the car with him. Then another car with four men pulled up. These eight men began lugging brown paper sacks of groceries through our front door for what seemed like an hour. It wasn’t Christmas. It wasn’t Thanksgiving. It was just on time. It was an act of kindness I never forgotten. The real weird thing is, fifteen years later, I became an associate minister at that same church and have had the honor of speaking at the funerals of two of those men who came to my home when we had nothing.

Jesus said in Matthew 25: “When the Son of Man comes in his glory, the King will say to those on his right, ‘Come, you who are blessed by my Father, inherit the Kingdom prepared for you from the creation of the world. ’For I was hungry, and you fed me. I was thirsty, and you gave me a drink. I was a stranger, and you invited me into your home. I was naked, and you gave me clothing. I was sick, and you cared for me. I was in prison, and you visited me. I tell you the truth, when you did it to one of the least of these my brothers and sisters, you were doing it to me!’”

Where is Jesus? In heaven, reclining on a cloud? In church on Sunday morning, sitting on a pew? Is he locked away in theVaticanor a seminary like a hidden treasure? Or is he chained to the pages of the New Testament? No. Jesus is sitting in the Emergency Room waiting area, an uninsured, undocumented immigrant. He is behind bars, so far from his parole date he can’t think that far into the future. He is sleeping under a highway overpass with newspapers for a blanket. He is homeless, evicted from his apartment, waiting in line at the shelter for a bed and a cup of soup. He is the poor child living in government housing with lice in his hair, the stripes of abuse on his body, and a growl in his stomach.

He is an old forgotten woman at the nursing home who no one thinks of anymore other than as a body taking up bed space. He is a refugee inSudan, living in squalor. Jesus is the poor, the downtrodden, the homeless, the sick, the hungry, the thirsty, the jailed, the lonely, and the overlooked. As we go to these – the least of these – we go to Jesus. Not figuratively, not symbolically, but literally. To serve those in need – with a gift, with help, with love, with kindness, with a brown paper bag of groceries – is to serve Jesus. 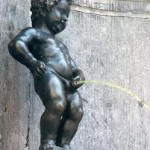